Trent Reznor wasn’t a particularly big fan of how his night at the Grammys came to a close.

The Nine Inch Nails frontman took to Twitter to grumble about the way the Grammy telecast signed off.

The ceremony wrapped up with Reznor teaming with Dave Grohl, Lindsey Buckingham and Josh Homme for a one-off supergroup-style performance to close out the show. The band hammered out two tracks (a Nine Inch Nails track followed by a Queens of the Stone Age tune), but viewers at home had the credits roll well ahead of the set’s conclusion. It was a production decision that infuriated Reznor. 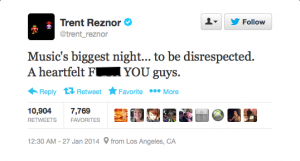 “Music’s biggest night… to be disrespected.”; fumed Reznor on Twitter. “A heartfelt F*** YOU guys.”;

“We save the end slot for something that is a bit of a jam,”; said Portnow. “Because you can have the energy go and then it’s just a matter of the clock.”;

In other Reznor Grammy news, Nine Inch Nails lost out to Vampire Weekend in the Best Alternative Music Album category.

via The Hollywood Reporter