Update, May 31: The touring production of Jesus Christ Superstar has been abruptly cancelled. The New York Times reports that the production company S2BN announced this Friday that the tour would be halted and all purchased tickets would be refunded.

What happens when you get alums from “NSYNC, Sex Pistols, Destiny’s Child and Incubus together in the same room? If today’s big reveal on Good Morning America is any indication, that combo leads to a touring production of Jesus Christ Superstar.

A 50-city arena-set production of Jesus Christ Superstar will be rolling through North America with members of the aforementioned groups heading up the cast.

Destiny’s Child’s Michelle Williams will be taking on the role of Mary Magdalene, Incubus frontman Brandon Boyd has been tapped for the part of Judas Iscariot, “NSYNC star JC Chasez holds the role of Pontius Pilate and JOHNNY GOSHDARN ROTTEN will wear the crown of King Herod. Ben Forster, winner of the UK reality series Superstar, will play the role of Jesus Christ.

We have the cast photo below if you’d like to stare at it and promptly rub your eyes in a comical “what is going on?”; fashion upon processing that this is actually a thing. (Click the image to expand.) 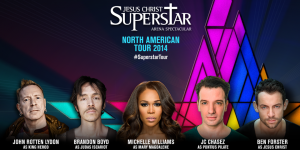 The tour is set to kick off in New Orleans on June 9. There are four Canadian stops on Jesus Christ Superstar“s North American trek. Winnipeg, Regina, Edmonton and Toronto are all currently slated to host the arena spectacular.