Rachel McAdams On Working With Philip Seymour Hoffman: ‘He Makes Sure The Stakes Are Very High’

A fresh-faced Rachel McAdams covers the August issue of Allure, and inside, she opens up to the magazine about her well-established acting career.

Currently starring in A Most Wanted Man (opens July 25), one of Philip Seymour Hoffman’s  final films, McAdams opened up about working with the prolific actor. “I learned so much from him. He really takes you under— he really took me under his wing,” she tells Allure. “You feel very taken care of, but at the same time there’s an element of danger: There’s a crackle in every scene. He makes sure the stakes are very high, and there’s a safety there, too. He had so much natural, raw talent, but he worked so hard, too. He really worked for it and didn’t let up. I’m sure that wasn’t easy.”

While she may now be working with some of Hollywood’s legendary actors, the Canadian recalls one of her very first roles on the big screen. “I remember standing backstage, dressed like a mechanic. I had a pink bikini on underneath, grease on my face, and I just remember breathing deep and thinking, Oh, my God, I have to go out there and do this striptease, as a man…as a woman,” she says of her The Hot Chick role. “How did I get here? It was probably one of the scariest moments I’ve had in my career. It stretched me in ways I could have never imagined. Literally.”

And when she landed another big break in the cult comedy Mean Girls, McAdams remembers having immense respect for co-star Lindsay Lohan, saying, “I was in awe of her talent. I looked at her as this experienced actor, and she had great comedic timing, so natural.” 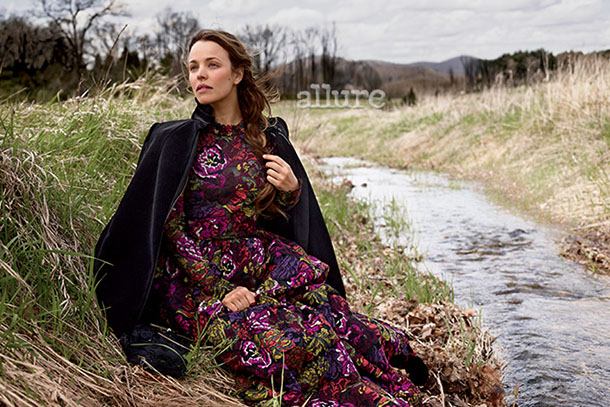 Photographer Carter Smith captures the natural beauty posing by a creek on a historic sprawling estate in Harriman, New York. The Tess of the D’Urbervilles-inspired shoot has the actress posing in vintage looks with minimal and fresh-looking makeup.

Now, more than a decade after her nerve-wracking scene in that pink bikini, McAdams reflects on the kind of legacy she hopes to leave behind. “I’m hoping it’s going to be complicated and have lots of dead ends and corners and sharp turns. I hope it can’t be summed up too easily when I’m done,”; she says.

Watch the trailer for A Most Wanted Man, below.