ET Canada Talks To The Stars Of The 2014 CCMA Awards

It was a night of big stars, big moments and big time accolades at this year’s edition of the Canadian Country Music Association Awards and ET Canada was on-hand to take in all the action.

Our Erin Cebula was right in the thick of things at this year’s ceremony and our never-not-hustling correspondent was able to wrangle interviews with the night’s big winners.

“I think I’m still in shock,”; admitted Female Artist of Year winner Jess Moskaluke when she spoke with Erin. “I’ve been so calm all day, which is very strange to anybody that knows me and all of a sudden… the tears came as soon as they called my name. Chad Brownlee is my label mate, so he’s like a brother to me and to have him present the award was extremely special.”;

The “Cheap Wine and Cigarettes”; songstress hasn’t sorted out where this prize from the CCMA will wind up just yet.

“Well, originally (the award) would go to my mom’s, but we just recently had a bad flood in Saskatchewan, so I’m going to have to find a new place for it because there is not a place for it at all right now,”; she explained. “I’ll probably just carry it around with me everywhere. I’ll just tape it to my body.”; 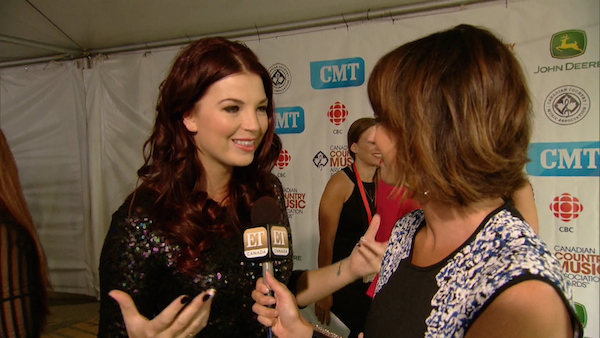 Speaking of Canadian country stars with some new hardware to lug around, Brett Kissel emerged victorious in the CMT Video of the Year category thanks to his “3-2-1″ promo. ET Canada was there when he was presented with his CCMA Award.

“Oh my gosh! Can you guys even believe it? Like here it is! It is the real deal,”; exclaimed the Albertan. “I’ve always dreamed of holding one or receiving one… I don’t even know what to say, it’s a really big moment.”;

The rapidly rising country star revealed that he just couldn’t keep quiet when it was unveiled that he’d won one of the evening’s big prizes.

The “Raise Your Glass”; recording artist told ET Canada that he wanted to make this special day a family affair.

“We’ve got some great parties to attend tonight,”; said Kissel. “It’s important that I spend a bit of time with my family who filled up about half of the arena here, coming to support me. So this award is as much for them as it is for me.”;

ET Canada“s backstage coverage of the CCMA Awards wouldn’t be complete without an appearance from the evening’s Single of the Year/Male Artist of the Year honouree Gord Bamford. The “When Your Lips Are So Close”; hitmaker was clearly still processing the massive night he had when we caught up to him.

“It’s just crazy,”; offered Bamford. “I feel very fortunate to be in the music business and its changed my life and my family’s life and I am extremely proud of what our teams accomplished. I am actually very shocked with these awards here tonight It was a great surprise.”;

The evening’s big winner more than happy to sing the praises of his Canadian country contemporaries.

“I am a patriotic Canadian and I think that we got some of the best talent in the world,”; shared the singer.

Speaking of Canadian talent, Bamford revealed to ET Canada that he signed a deal with the American wing of Sony last week.

“We are going to try and get some redneck Canadian music in the states,”; notes Bamford.

Be sure to tune in to ET Canada tonight for our full coverage of the CCMA Awards.