As many of you know, David Hasselhoff is starring in a Knight Rider-inspired spoof, tentatively titled Killing Hasselhoff. We say “Knight Rider-inspired’ because, well, the film is more about the Hoff’s crazy career, which just so happens to include the hit 1980s series about a man and his talking car.

And although the voice of Michael Knight’s trusty metal companion KITT originally belonged to actor William Daniels (Mr. Feeny on Boy Meets World!) the reigns have now been handed over to Justin Bieber.

That’s right: the Biebs is the new voice of KITT. “He called me and asked me for a favour and I called him back and said, ‘Can you do me a favour?’ and he said, ‘Yes,'” David explained to Yahoo. “I did his favour first because I love the Bieb. I think he’s a cool kid and he gets a bad rap. He’s a good guy and I like his music.”

And despite Justin’s penchant for bad boy behaviour, Killing Hasselhoff co-star Ken Jeong says the 20-year-old was a delight to work with on set. “Justin couldn’t have been more kind or accommodating. He was just so generous with his time, and nailed the scene.” 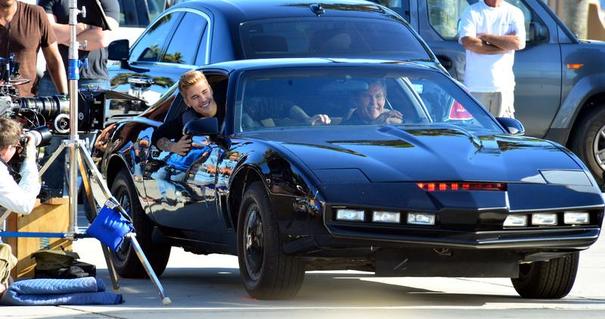