For years, George Clooney was Hollywood’s most high-profile confirmed bachelor, swearing he had no desire to ever walk down the aisle again. And yet here we are: on Saturday, the Oscar-winning actor proved himself wrong — in the best possible way.

All smiles, the tuxedoed 53-year-old arrived at the venue in a water-taxi brimming with family, including his father, news broadcaster Nick Clooney. As expected, there were hundreds of onlookers and photographers on hand, all hoping to catch a glimpse of the festivities. 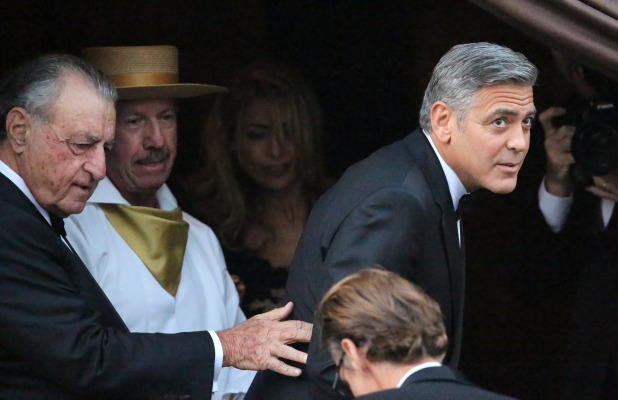 Blunt and Barroso pulled out all the stops for their wedding day looks. The Edge of Tomorrow actress wore an embellished Emilio Pucci halter-neck gown for the lavish event, while Damon’s wife slipped into a violet Naeem Kham floor-length dress.

Damon’s longtime collaborator Ben Affleck was unable to attend due to his Gone Girl press obligations. And clearly the actor seemed nonplussed by the scheduling conflict, telling ET Canada, “Yeah. Some people have to work and everybody else gets to be in Venice. But [George] found a great girl and I’m happy for them. I wish them the best.”;

Also noticeably absent from the festivities was close friend Brad Pitt and his wife Angelina Jolie. The fellow newlyweds were forced to skip the Italian nuptials due to a scheduling conflict with the filming of their upcoming movie By The Sea.

The post-ceremony dinner included lobster, lemon risotto, and fried polenta with mushrooms. The reception music: everything from Blondie to the Jackson 5 to Amy Winehouse to Daft Punk.

Us Weekly confirmed guests received gifts from the couple, including a weekend itinerary,  iPod and speakers in their rooms (with a personalized music playlist), a framed photo of George and Amal, and a note that read: “We’re both so glad you’re here. You’ve come a long way so we’ll make it worth the trip. Thanks for being here. It means the world to us.”;

On Monday evening, the couple took part in a civil marriage ceremony at the 16th-century Palazzo Cavalli adjoining the Venice town hall.