Brad Pitt Takes Us To The Great Outdoors, Talks Fatherhood

Brad Pitt and Mark Seliger take us to the great outdoors in the latest issue of Details magazine. The collaboration marked the fifth time Seliger had shot with Pitt, and exactly 20 years after their initial photoshoot together.

Pitt becomes one with nature in the scenic photo spread, and as he tells the men’s magazine, it’s a place that makes him feel at home. “I will always be most comfortable in the outdoors. I grew up in the Ozarks—something resembling Mark Twain country,” he reveals. “The woods, rivers, bluffs, lakes, and caves have all left an indelible mark on me. And I’m quite reverential when it comes to a tree.” 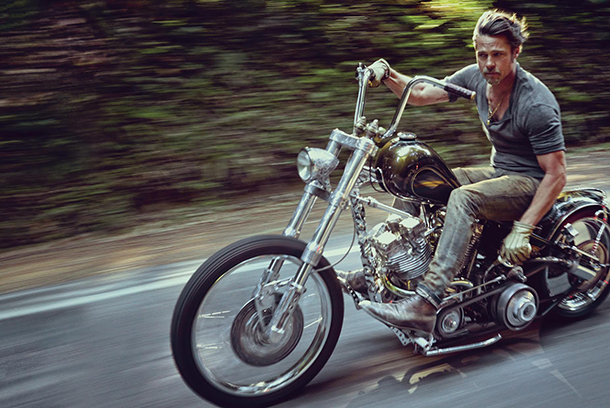 Sporting a moustache and donning some casual outfits, the Fury star fits right in with the unfussy surroundings. And if the picturesque photos weren’t enough, we get to jump on the back of Pitt’s motorcycle in Details’ behind-the-scenes video of the shoot. It’s a moment of solitude that the actor tries to grab where ever his career takes him, but especially on the paparazzi-filled roads of Los Angeles. “I try to carve out time for a solo ride in every country I travel to, from the Highlands of Scotland to the Atlas Mountains of Morocco to the belly of India,” he tells the magazine. “I haven’t even come close to fulfilling my list—yet…But, in the traffic of L.A. with a helmet on, I’m just another asshole on the road.”

And at home, it’s these types of extremes that keep the actor going, and fuel the public’s love for the actor and his wife Angelina Jolie. When discussing fatherhood and his six children (which he took on within a span of only two years) he says, “listen, I’ve always embraced extremes, so it doesn’t feel odd to me. There’s a couple weeks of finding your balance, and then it’s in stone.” He adds, “I’ve discovered I don’t suck at being a dad.”