World Mastercard Fashion Week began wrapping up on Friday, but not without a few exceptional collections hitting the runways first.

The annual Toronto event brings together some of the biggest names in Canadian fashion along with up and coming designers looking to make a name for themselves. ET Canada brought you the runway action right here, and now, we’re breaking down all the S/S15 trends that hit catwalk. Flip through the top six trends and arm yourself with the knowledge to pick just the right pieces come this spring: GALLERY – Trend Spotting At Toronto Fashion Week S/S 2015

At Mikhael Kale, the designer’s architectural lines were softened by sheer, luminous and ethereal fabrics. As one of the week’s highly buzzed-about show, Kale did not disappoint, unveiling the most detailed, hand-worked and conceptual collection of the week.

And capping off the Friday night was Mikael D with his red carpet-ready looks. Intricate beading wowed as the audience watched laboured art-deco pieces continue to hitting the runway. 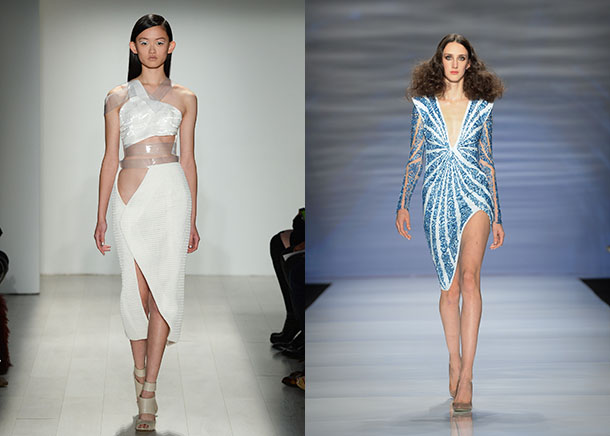 The trends continued on Day 4 of World Mastercard Fashion Week.

Label Soia & Kyo rolled out the astro turf carpet last night to debut their SS15 collection. Its range of outerwear and sportswear for both men and women impressed in a palette of khaki, army green and blush pink. The entire showing was energized with refreshing pops of bright yellow and an adorable french bulldog who kicked off the show with a turf-lined walk down the runway. 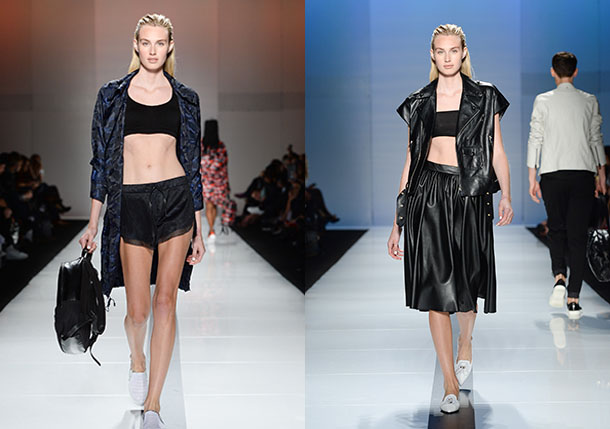 Many more highlights are set to come from Day 5 of World Mastercard Fashion Week. We’ll be sharing our favourite moments with the hashtag #ETCanadaTFW, so keep it here, and keep on top of all things fashion below… 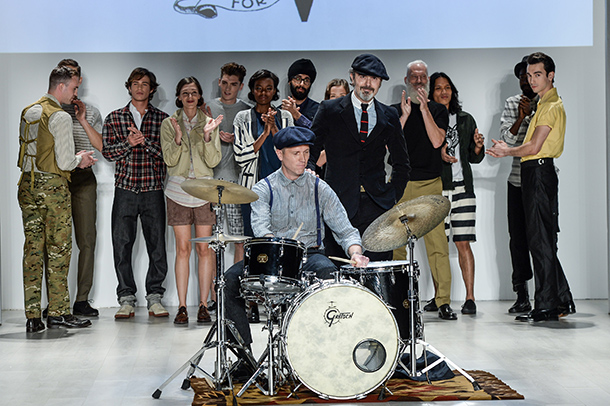 And later that evening, crowd-favourite Mackage left no detail unturned. The Montreal-based label flew in British DJ, and it-girl, Chelsea Leyland, and set the mood with a fluorescent-lined runway. A well-edited collection of the label’s signature leather pieces charged the runway in a fresh palette of cobalt blue, khaki, black, yellow and white. 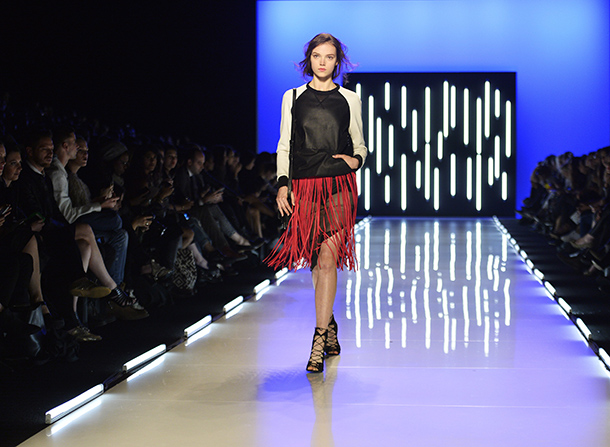 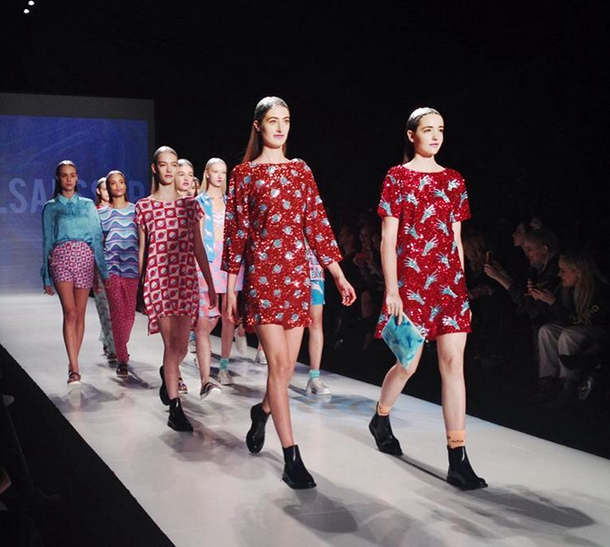 Tuesday night saw Bustle and Montreal-based designer Melissa Nepton present their fresh and vibrant Spring/Summer looks to Toronto crowds. Bustle brought the colour back to the runway with their vibrant menswear focused collection which was soon followed by Nepton’s athletic-inspired mix of texture.

Canadian designer Sid Neigum followed up Monday night’s Start Up win with yet another on Day 2, taking home the top prize in the “Inspired by Minnie Mouse”; competition for a playful take on his S/S15 modular origami design. Blogging duo Samantha and Caillianne Beckerman, along with Minnie Mouse herself, crowned the up-and-coming designer with his very own set of mouse ears and a $2500 prize. Mercedes-Benz Start Up competition finalists were asked to design a look inspired by the iconic Disney character, resulting in whimsical outfits that would definitely make Mickey proud. 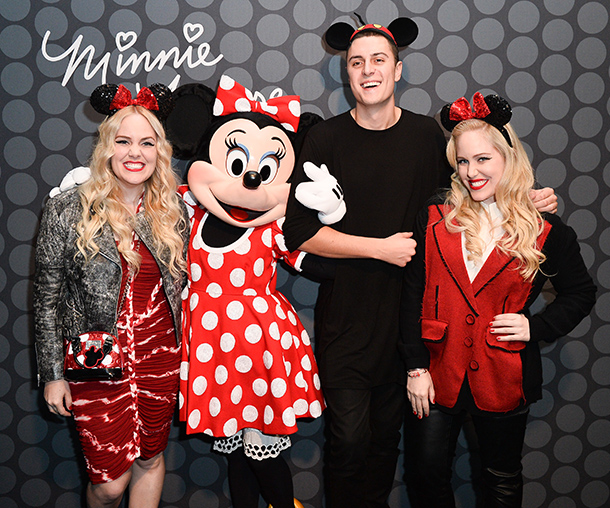 Day two of Toronto Fashion Week ended with a little romance thanks to Target’s crimson-lined fashion show. With Juliette Greco’s 1950s hit “Sous Le Ciel De Paris”; setting the mood, the retailer transported audiences to Paris for a look at some highly-covetable winter looks. A Newly pregnant Coco Rocha took in the cozy looks in the front row while another Canadian supermodel Andi Muise strutted down the runway with Bullseye the dog. 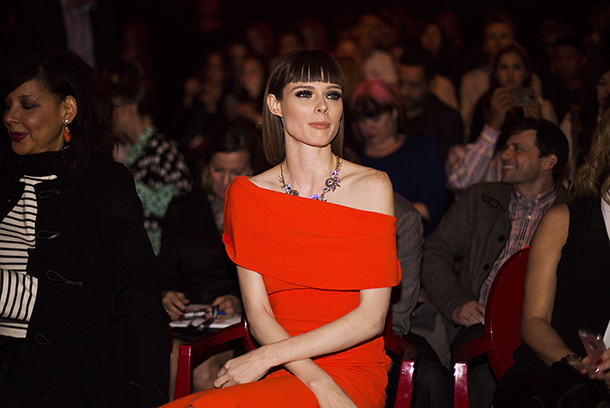 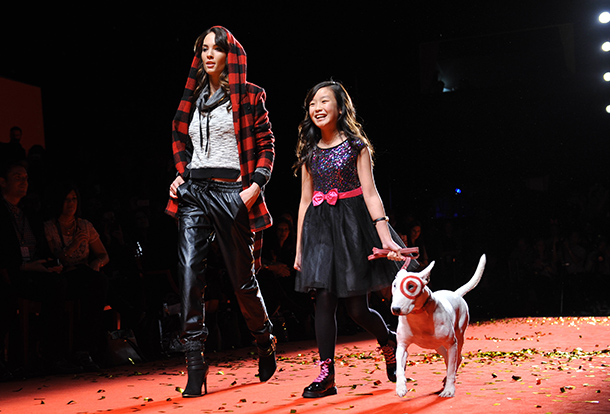 Day 1 of World Mastercard Fashion Week saw crowd-favourite Joe Fresh celebrate Canadian fashion with their documentary “This Is Now.’ Dedicated to Canuck design influencers, the short film premiered at their jam-packed WMCF party on Monday night. Solange Knowles brought the star-power to their signature orange carpet and later took to the decks as DJ.

It was also a big night for Canadian designer Sid Neigum, he opened the packed event with his impressive collection inspired by modular origami and won top prize in the Mercedes-Benz Start Up contest, which included a cash prize of $30,000.