How hot is Taylor Swift right now? It’s to the point where even the pop star’s static is granted dominion over the top of the charts.

“Track 3″ from Taylor’s hotly anticipated album 1989 became available for a brief run on Canadian iTunes yesterday. Fans were quick to download the new song but were perplexed by what they received in return for their $1.29. Instead of getting a new Taylor insta-smash, listeners were treated to eight seconds of white noise. The release wasn’t a challenging new direction from the “Shake It Off”; singer, mind you. The downloadability of “Track 3″ was actually just some sort of iTunes glitch which is why the song was just a brief stretch of noise.

The weird accidental release quickly soared to the top of the iTunes singles chart here in our lovely lil’ country and we imagine there was no shortage of people that speculated over who Taylor was static-ing about in that brief tangle of white noise. 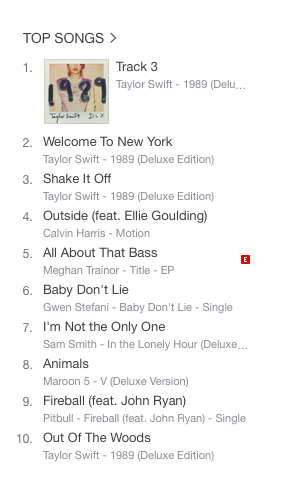