Back at home in London, the newlyweds fêted once more with a bash hosted by Mrs. Clooney’s parents, Baria and Ramzi Alamuddin.

The historic Danesfield House Hotel played host to 200 friends and family members — most being friends of the Alamuddin side of union — including CNN host Hala Hourani, former Lebanese Prime Minister Saad Hariri, a slew of Middle Eastern government heads and colleagues from the bride’s London legal firm.

“We’re so proud to have George in the family that I’m traveling from Beirut to London just to kiss him and say, “Welcome!'” one wedding guest told People magazine.

The 36-year-old human rights lawyer, and newly-crowned trendsetter, wore a sleek gold gown and wine-stained lip for the British festivities.

“George was very nice, absolutely adorable. Amal looked incredible and they seem very, very much in love,”; the guest added. “George went from table to table to meet everyone and at more than one table, when he noticed glasses were empty, he got a bottle and poured wine into everyone’s glasses.”;

Following a reception in the main hall of the lavish hotel, the Clooneys continued the celebration in a large white tent where guests dined on a Michelin-starred menu.

Update (October 25, 2014 – 3:05 p.m.): Third time’s the charm! George and Amal Clooney are on their way to their third wedding celebration of the year. The glamorous couple was photographed leaving their Oxfordshire home on Saturday night as they headed to their post-wedding party venue at the historic Danesfield House Hotel & Spa in Buckinghamshire, England.

The newly-minted Mrs. Clooney looked chic as usual, pairing a slinky shimmering gold gown with a deep red lip, and opting against a laboured up-do. 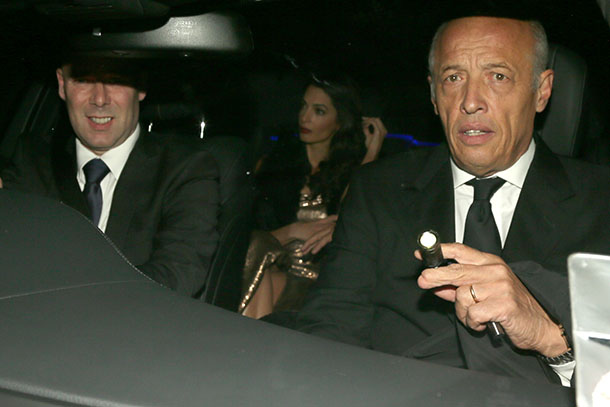 At Danesfield House, meanwhile, guests were seen arriving at the venue ahead of tonight’s festivities, where heavy security inspected cars for before entry onto the grounds.

The party continues for George and Amal Clooney, who are set to have another wedding celebration in London.

Preparations are underway for a special event taking place in England this weekend, which is thought to be the pair’s third wedding celebration. 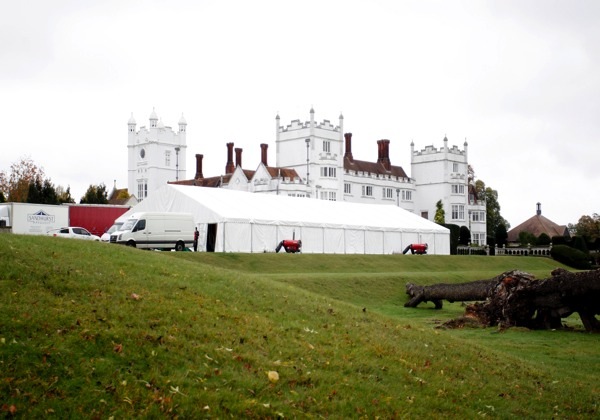 A white marquee has been spotted on grounds of the exclusive Danesfield House, in Buckinghamshire. Rumour has it that George’s pals Brad Pitt and Angelina Jolie will be part of this weekend’s celebrations, as they missed the three-day Italian leg of the tour.

“Wedding number three”; will kick-off on Saturday evening at the gorgeous house which sits on 65 acres of gardens and boasts views of the Thames and the Chiltern Hills. 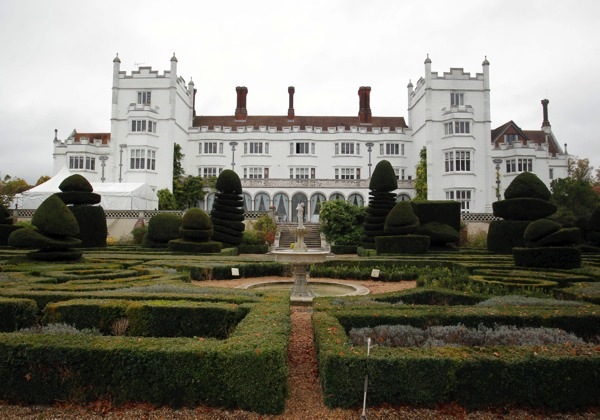 The couple were officially married at the end of September in Venice in a romantic wedding. It’s being reported that this event was arranged mostly for Amal’s family and work colleagues, but it’s already looking like George will have a few A-Lister friends also at the celebration!