From to Paris to Sydney to Toronto, protesters gathered across the globe to show their support for the Russian punk band Pussy Riot, who were recently sentenced to two years in prison for hooliganism.

Nadezhda Tolokonnikova, Maria Alyokhina, and Yekaterina Samutsevich were arrested following their performance  in a Moscow Cathedral, calling on the Virgin Mary to “throw Putin out.”;  While the three women, dubbed “prisoners of conscience”; by Amnesty 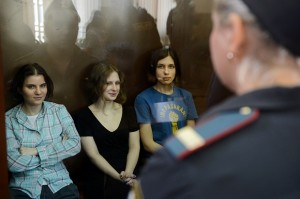 International, have gathered worldwide support  for bringing attention to what is seen as an increasingly heavy-handed government, the women did not garner sympathy from Russian Judge Marina Syrova, who handed down the ruling and said: “The girls’ actions were sacrilegious, blasphemous and broke the church’s rules.”;

Artists like Madonna,  Bjork, Paul McCartney and Sting have been outspoken about the sentence now labelled as disproportionate to the crime, by US and European governments.

And in a new statement, Madonna says: “I protest the conviction and sentencing of Pussy Riot to a penal colony for two years for a 40-second performance extolling their political opinions.”; Also onside with the punk  provocateurs is Canadian performance artist Peaches who made a “Free Pussy Riot”; video  and Chloe Sevigny who read the defendants’ statements in a public reading in New York.

Black Keys drummer Patrick Carney : “We will never being playing a show in Russia as long as they imprison innocent musicians for speaking their minds peacefully.”;

Mischa Barton: “I can’t believe sentencing #pussyriot to2 yrs in jail.as someone who lived in Moscow and has filmed & seen inside the jails my heart goes out.”

Adrian Grenier: “These girls got sentenced to 2 years in prison for this. I assume we are in agreement that it’s not ok. “

Kate Walsh:  “What a massive disappointment for Russia: imprisoning pussyriot?? Shame on you.”