Biopic Award Winners and Those In Their Footsteps

In the past decade many Best Actor and Actress nominations have gone to an actor playing the lead in a biopic.  Most recently Meryl Streep and Michelle Williams both nabbed some shiny new hardware at the 2012 Golden Globes for their portrayals of Margaret Thatcher and Marilyn Monroe respectively.

Three time Academy Award winner, Meryl, picked up her latest award for The Iron Lady, playing the role with such precision she was unbeatable come award season, picking up both the Oscar and the Golden Globe.

Meanwhile, Michelle Williams won her first ever Golden Globe – losing the Oscar to Meryl herself –  for her take on the infamous Marilyn Monroe in My Week With Marilyn.

Jamie Foxx shone brighter than any star in 2004, winning the Oscar, the Golden Globe and the Screen Actors Guild Award for Ray. The actor was incredible as the late Ray Charles, singing his way to many fans’ hearts and certainly to a very hefty amount of hardware.

But, who could forget Joaquin Phoenix and Reese Witherspoon? The two paired up for Walk The Line, a biopic chronicling the life of Johnny Cash and his romance with June Carter and little did they know how widely received their roles would be. Joaquin picked up the Golden Globe for Best Actor in a Musical or Comedy that year, and Reese did the same and then some, nabbing her first ever Oscar.

Now, following in Reese’s footsteps is Jewel, up next to take on the Cash family, playing June Carter Cash in Lifetime’s Ring Of Fire. We were lucky enough to catch up with her on set and told us she “was really glad to bring more of her life to light and show people what an interesting and intelligent and funny woman she was and what a great entertainer.”; 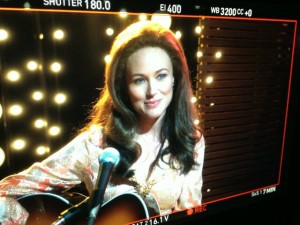 Meanwhile, the question many are asking is can an iconic role in a biopic turn Lindsay Lohan’s career around? The troubled actress has nabbed the role of Elizabeth Taylor in the TV movie Liz & Dick and seems to be having a good time, tweeting out many photos of her looking a lot like Liz from the set.

And, two people not afraid of critical acclaim, Naomi Watts and Daniel Day Lewis, who are also attached to biopics. Naomi is starring in Diana, a film surrounding the life and tragic death of Princess Diana and Daniel had socials abuzz with his amazing transformation into Abraham Lincoln, for Steven Spielberg’s latest project, Lincoln.

For more on biopic award winners and the stars who might follow in their footsteps, watch the video below!