Was That Charlie Sheen On The ‘Two And A Half Men’ Finale?

In the final moments of last night’s series finale of Two and a Half Men, someone who looked an awful lot like Charlie Harper walked up to the door of the show’s Malibu beachhouse — only to have a piano fall on top of him.

But was that Charlie Sheen in the scene?

Despite producers dropping hints and clues that the show’s former star would return for a swan song appearance, that was actually a Sheen lookalike who bought the farm, and not the real deal.

For the record, exec producer Chuck Lorre explained the ending, and Sheen’s non-participation, in the final vanity card that flashed on screen at the end of the show.

“I know a lot of you might be disappointed that you didn’t get to see Charlie Sheen in tonight’s finale. For the record, he was offered a role.

“Our idea was to have him walk up to the front door in the last scene, ring the doorbell, then turn, look directly into the camera and go off on a maniacal rant about the dangers of drug abuse. He would then explain that these dangers only applied to average people. That he was far from average. He was a ninja warrior from Mars. He was invincible.

And then we would drop a piano on him.

We thought it was funny.

Instead, he wanted us to write a heart warming scene that would set up his return to primetime TV in a new sitcom called The Harpers starring him and Jon Cryer.

We thought that was funny too.” 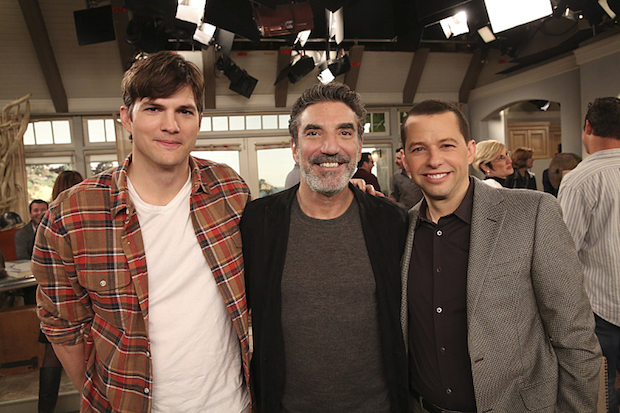