Lindsay Lohan has once again found herself in hot water, and this time it’s for using the N-word in a social media post.

The Mean Girls star drew heat on Tuesday night for her use of the controversial racial slur that, while regularly used by rappers, is strictly verboten to everyone else — including pale-skinned actresses.

The inflammatory Instagram post originated at a Kanye West concert that Lindsay was attending in Paris. Clearly enjoying the music, she posted a pic from the audience with the accompanying caption: “#kanye&kimAlldayn*gga$ fun show #PFW #goodpeople=goodlife all from good moms!!!!!! @dinalohan @krisjenner”; (but without the asterisk).

Realizing what she had done, she deleted the post immediately and posted an amended version (below) — but not before thousands of her followers saw the original. 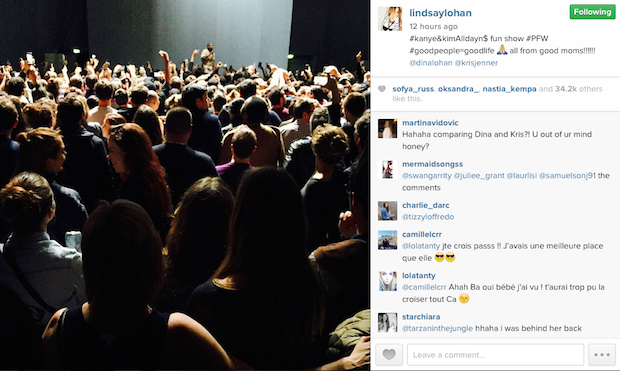 “You said the N word?!?”; replied one of her horrified followers. “Wow I seen your original post and so did thousands others.”

A rep for the actress said Lindsay was referencing the lyrics in Kanye’s song “All Day,”; and relayed her apology (as reported in The Daily Mail). “She is a friend of [Kanye’s],”; said her rep, “it is his new song, her intention was not to offend anyone and she apologizes.”;