It maybe fall, but stars flocked to Paris for a little “spring fashion fling.’  Emma Stone and Amanda Seyfried were spotted front row at Miu Miu where they fell head-over-heels for shoes. “I like the sandals,”; Amanda points out specifically. “You don’t see that very much on a runway. I can’t wait for summer now.”;   And Emma says she’s looking forward to putting away her heels come spring: “There were lots of flats which was nice.”; 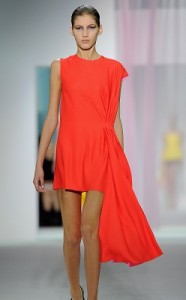 Meanwhile, Kanye West was spotted making the rounds at Givenchy, Christian Dior, Valentino and Chanel. And Jennifer Lopez also made it over to Chanel, with her boyfriend Casper Smart and daughter Emme in tow, for Karl Lagerfeld’s amped up wind-powered runway .

Salma Hayek , who’s always a fan of French fashion, was wowed  by Sarah Burton’s dramatic bee-inspired show at Alexander McQueen and she reveals why the house always creates buzz amongst the stars:  “I will see myself in a different version of all of them because this is actually the designer that cuts the most for curves, for women. I can always find lots of stuff there.”;  Salma’s also a regular at Stella McCartney“s shows, as is Kate Moss and of course proud papa Paul who calls his daughter’s latest designs “very clever.”  Stella herself says she wanted to show sexy wasn’t just something that’s on the outside: “This collection was a little bit more about, you know, just having windows into the sexiness, using transparency and layering, shadowing.”;

Join more celebrities for a front row look at Paris Fashion Week’s spring/summer 2013 shows in the video below!