“Silence =Death! 😷. Song For World AIDS Day! 🌎🌍🌏. #toxic#poisonparadise 🔥 @britneyspears. 🎉🎉🎉 Happy Birthday!! 💞💞💞💞,” wrote Madonna on Instagram along with a video of her performance, in which she accompanies herself on acoustic guitar.

Madonna has been a longtime AIDS activist, which she reminded us in a social media post featuring a letter that was published as a full-page ad in Billboard back in 1991.

In 1991 i took out a full page ad and published this letter. In Billboard magazine. So many lives have been lost since then!!! (And before!) we need to continue to make people aware of this disease, to do what we can to facilitate research and above all… https://t.co/bvWSoJJBVt pic.twitter.com/9Qjds42EjY

She also shared a vintage photo of herself and some pals, including artists Keith Haring and Martin Burgoyne, both of whom lost their lives to the disease.

In honor of World AIDS Day!! Im posting this photo of me with 2 of my dearest friends who died of AIDS. Kieth Haring and Martin Burgoyne. I Loved them both dearly! ♥️ We can never forget the lives lost by this disease!! And that there is still no cure… https://t.co/OhkRYXiR98 pic.twitter.com/OFdTzwJbr9

Madonna’s “Toxic” cover came shortly after the 59-year-old pop icon responded to an Instagram meme about the song, apparently misunderstanding that the point of the meme was to praise “Toxic”, not trash it. 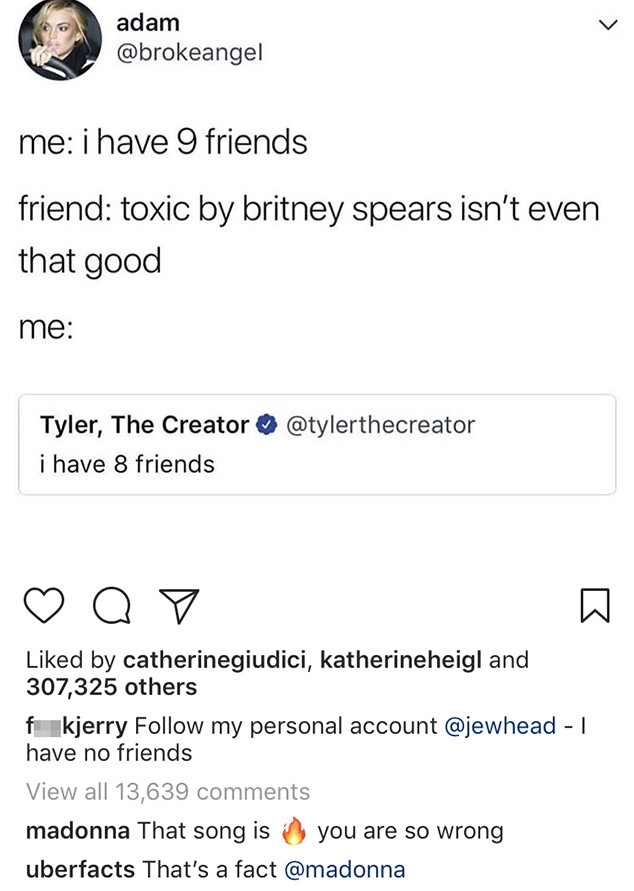 Madonna’s defense of the song led a number of Twitter users to goof on her for not understanding the meme, including the Instagram user who started the meme, who replied: “Mom, I don’t think you get the meme, @madonna… Toxic is life.”

I’m dying at Madonna not getting the meme. pic.twitter.com/M5s4jejvYj