Elton John put on a brave face as he took to the stage in Hamburg on Tuesday night, just two days after his mother, Sheila Farebrother, died aged 92.

The 70-year-old paid tribute to his mom as he continued his Wonderful Crazy Night tour at the Barclaycard Arena, dedicating a very special performance of “Your Song” to her.

John, who took to Instagram Monday to share a photo of the pair alongside a moving message, told the audience: “Yesterday was a sad and hard day for me because my mother passed away.

“I’m glad to say she passed away peacefully, with no pain. But maybe sooner than she should have done, so I was quite shocked.”

So sad to say that my mother passed away this morning. I only saw her last Monday and I am in shock. Travel safe Mum. Thank-you for everything. I will miss you so much. Love, Elton

The musician continued: “And I was thinking how I could pay tribute to her tonight, and what song I should choose.

“Well, this next song I wrote at her house or her apartment. I can remember every single minute of writing this song with Bernie [Taupin].

“So this is the song I want to ­dedicate to her. And it’s taken me from nowhere to somewhere. So thank you, mom,” he added, according to the BBC.

John, who was born Reginald Dwight, was Farebrother’s only son. The pair had just started speaking again following an eight-year feud.

The star announced in February 2016 that they had settled their differences, saying at the time: “Out of respect for my mother’s privacy, I have always shied away from speaking publicly about our relationship.” 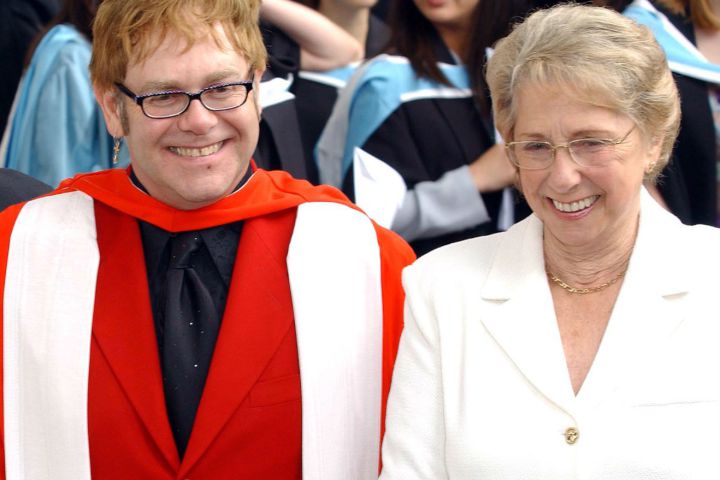 John, who also wished Farebrother a Happy Mother’s Day earlier this year, told the Daily Mirror: “However, I can say that we are now back in touch and have been so since my mother’s 90th birthday.”

The pair’s troubles are said to have began when John told Farebrother to cut all contact with two of their friends, Bob Halley and John Reid, following an argument.

The “I’m Still Standing” hitmaker previously said he “didn’t miss” his mom when they weren’t talking.

He told Rolling Stone of their rift: “It upsets me, but to be honest with you, I don’t miss her. When she says things in the press, like last year, ‘I haven’t spoken to Elton since he married that f**king a**hole David Furnish…’ That was pretty hard to take. I don’t hate my mother. I look after her, but I don’t want her in my life.”