PM Justin Trudeau Joins Fans For Advance Screening Of ‘The Last Jedi’, Says It Was ‘Outstanding’

The Force was strong with Justin Trudeau when he joined “Star Wars” fans for a special advance screening of “The Last Jedi” in Ottawa on Tuesday night.

And these weren’t any fans: Canada’s Prime Minister attended the screening with an array of guests from Children’s Hospital of Eastern Ontario and The Boys and Girls Club of Ottawa, who were invited to catch a sneak peek of the highly anticipated sequel before its official opening on Friday.

Highlights From The World Premiere Of ‘Star Wars: The Last Jedi’

Adam Driver Compares ‘The Last Jedi’ To ‘The Force Awakens’

Laura Dern And Oscar Isaac On ‘The Last Jedi’

RELATED: ‘The Last Jedi’ Cast Takes ‘Which Star Wars Character Are You?’ Quiz, With Surprising Results

“It was such a thrill to be able to share the magic of ‘Star Wars’ with the Prime Minister and his friends from CHEO and The Boys and Girls Club of Ottawa,” said Greg Mason, VP, Marketing, Walt Disney Studios Canada. 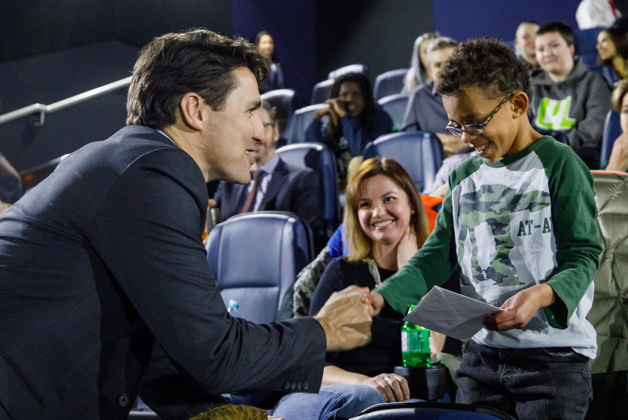 “These families embody the bravery and hope so prevalent in the ‘Star Wars’ movies,” added Mason. “They are the true inspirations.”

Following the screening, Trudeau shared a photo from the event on Twitter, and even offered a brief review of the film, which he described as “outstanding.”

The force is strong with this group of kids from @CHEOhospital, @bgcottawa, and our caucus. As for #TheLastJedi: outstanding. pic.twitter.com/rQYvGZZlww

He doubled down on his praise for the film when the topic came up in the House of Commons on Wednesday. When asked about the film, Trudeau said “the ‘Star Wars’ movie was outstanding.”

This isn’t the first time that Trudeau has weighed in with a review of a “Star Wars” movie. Way back in 1983, the 11-year-old future PM was interviewed after catching a screening of “Return of the Jedi” with his father, then-PM Pierre Trudeau.

“It was better than ‘The Empire Strikes Back’ and ‘Star Wars’ — at least I think so,” said the aspiring movie critic in this vintage video, courtesy of CBC: