In the wake of the tsunami of sexual assault allegations that have been made over past weeks, we’ve seen all manner of statements from those accused, ranging from outright denials to full apologies to sort-of apologies (“I’m sorry for what I did but I didn’t really do all of it”) to apologies that don’t actually include an apology (see: Louis C.K.) to the ever-popular stepping-back-to-take-time-to-examine-myself statement.

For sheer weirdness, however, we have a champion: disgraced celebrity chef Mario Batali, who has been accused of sexual harassment by multiple women, and issued an apology that bizarrely included a recipe for delicious cinnamon rolls.

RELATED: Mario Batali Fired From ‘The Chew’ In The Midst Of Sexual Harassment Allegations

Batali, 57, was fired from ABC’s “The Chew” and suspended from his global restaurant empire, B&B Hospitality Group, following sexual harassment allegations made by some of his former employees.

On Friday, Batali sent an email to subscribers on his email list, offering a “no-excuses” apology in which he states he’s taking “full responsibility” for his actions and promises to “work every day to regain your respect and trust.”

Then he adds an out-of-left field P.S., writing: “in case you’re searching for a holiday-inspired breakfast, these Pizza Dough Cinnamon Rolls are a fan favourite.” 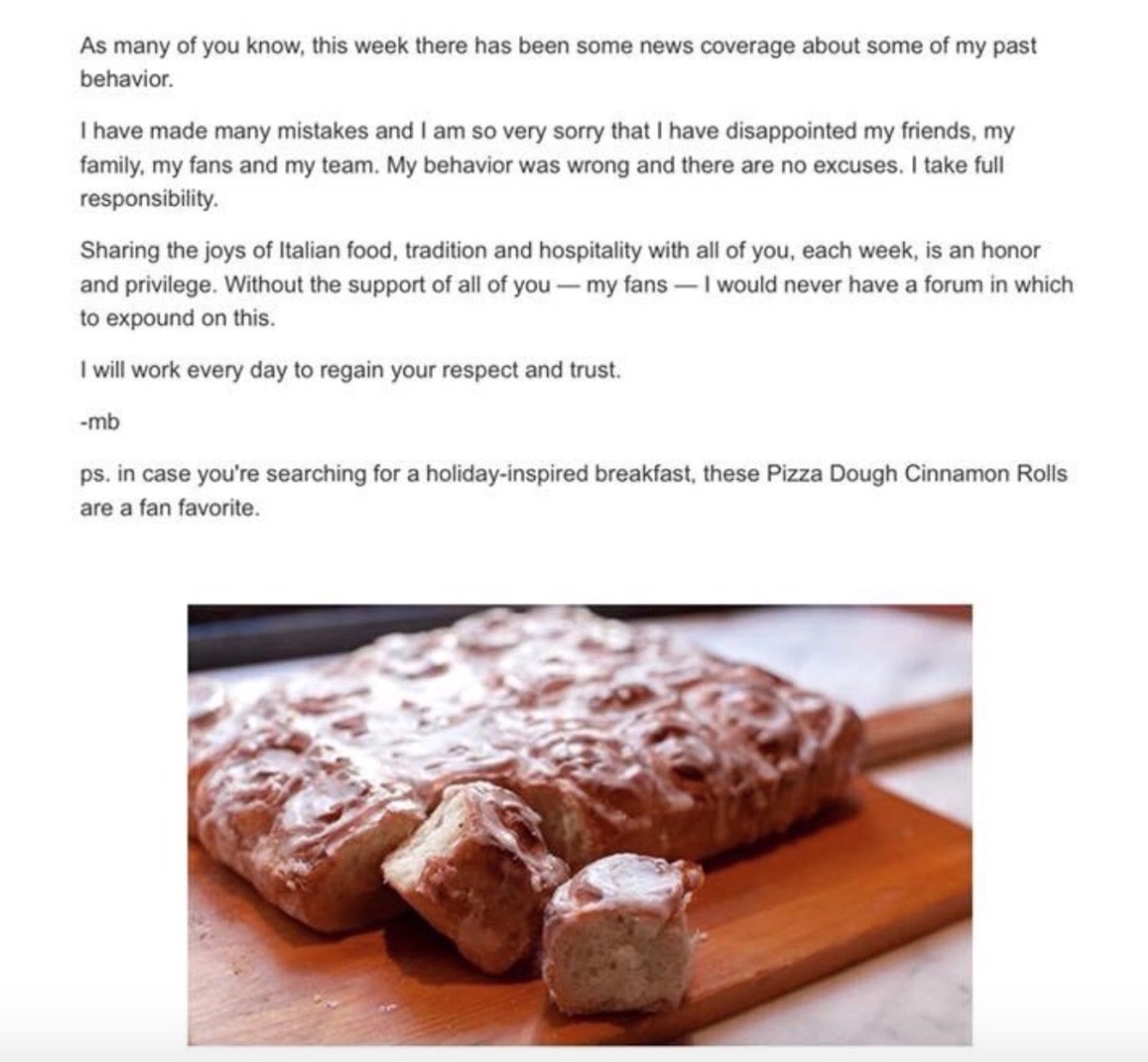 Batali’s weird add-on recipe is raising eyebrows throughout the Twitterverse, with numerous comments remarking on the strange addition.

Hi guys, it’s 2017 and Mario Batali just apologized for sexual harassment AND gave a recipe for Pizza Dough Cinnamon Rolls all in one email. pic.twitter.com/88VuVB8a4H

Can you *imagine* the thought process that went into that? “Okay, I’ll do three paragraphs about my sexual assaults and then I’ll hit them with the cinnamon rolls recipe. Who could stay mad after that?”

You know @MarioBatali is very serious about changing his behavior because he included a recipe for pizza dough cinnamon rolls along with his apology for sexually assaulting women. pic.twitter.com/BLT2nyQLX8