Alicia Keys Heats It Up With ‘Girl On Fire’ Video 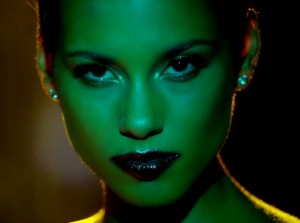 Motherhood and the search for domestic bliss inspires Alicia Keys new video Girl On Fire. In some retro-inspired scenes the pop-sensation is shown, doing everyday tasks like: caring for kids, cleaning, and helping an elder.   While in other shots she’s featured in a modern light, singing lines like: “Looks like a girl, but she’s a flame, so bright, she can burn your eyes. Better look the other way.”

Juggling family duties and a career while trying to look good doing it, is something many can relate to – including, no doubt, the star and new-mother herself. But, by the looks of the fun and inspiring video, this girl manages to find a good balance. She’s as stunning as ever,  she makes family life look glamorous and, like the song’s lyrics, she proves “she’s got  both feet on the ground and she’s not backing down!”

In one of the most artistic and interpretive scenes, Alicia enlists the help of gold-medal winning gymnast Gabby Douglas…or her shadow shall we say. While the soulful chanteuse is sitting on a couch singing, Gabby’s silhouette performs a routine and ‘shadowboxes’ alongside a man’s. At times the two figures dance, at other times they appear to be fighting. Like domestic life, it’s beautiful, complicated and unexpected.

You won’t see Alicia’s upcoming fifth album, also titled Girl On Fire, on shelves until November 27th, but you can watch the full video below!