Director John Carpenter is very much alive, but somebody should have told Rotten Tomatoes.

In a now-deleted Tweet, the movie review aggregation site mistakenly implied that the “Escape from New York” and “Halloween” director had died. 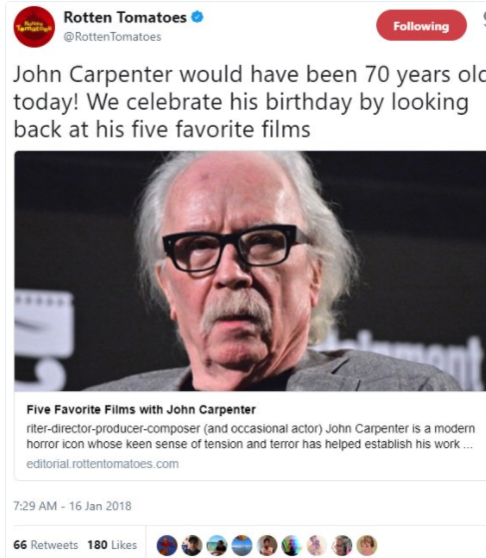 The tweet was meant in celebration of Carpenter’s 70th birthday Tuesday, but instead said the director “would have been 70.”

A few hours later Rotten Tomatoes apologized for the mix-up.

Sorry for the mix up earlier, the fog was heavy this morning. Happy 70th birthday John Carpenter! pic.twitter.com/k7sCznczl9

Carpenter himself weighed in on Twitter with his own confirmation he’s still alive and well.

To Rotten Tomatoes, despite how it appears, I'm actually not dead.

Though Carpenter hasn’t directed a film since 2010’s “The Ward”, he did release an album “Anthology: Movie Themes 1974-1998”, featuring his classic compositions from films like “The Thing” and “Christine”. According to Entertainment Weekly, he also signed a deal last year with Universal Cable Productions to develop a new scripted series.