To paraphrase Monty Python’s classic Dead Parrot sketch, Python member Terry Gilliam has ceased to be. Bereft of life, he rests in peace; he is no more.

Or at least that’s what Variety claimed, posting an obituary on its website honouring Gilliam, who carved out a post-Python career as director of such iconic films as Brazil and The Fisher King.

One teensy problem with the story: Gilliam is very much alive.

Having apparently fallen victim to accidentally posting a pre-written obituary (a common journalistic practice), Variety was forced to issue a red-faced retraction when it was revealed that Gilliam was not, to once again steal from the Dead Parrot sketch, “pushing up daisies.”;

//platform.twitter.com/widgets.jsGilliam, as befitting a member of one of the world’s funniest comedy troupes, made light of the whole situation, taking to Twitter to apologize for being dead — and then posting a link to a hilarious death-bed photo on his Facebook page, declaring that he was only 30 (it was all those bad reviews from Variety that made him look older):

I APOLOGIZE FOR BEING DEAD especially to those who have already bought to tickets to the upcoming talks, but,… http://t.co/aTM7rAAqd2 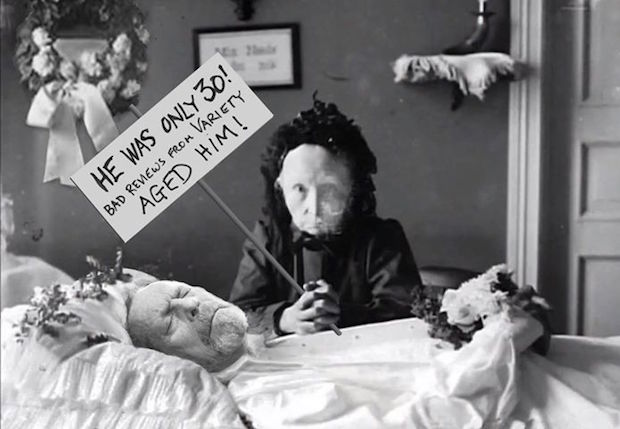