British actor Robert Pattinson is best known as the impeccably dressed Edward Cullen in The Twilight Saga films, but often flies under the radar in normal clothes.

In this new cover shoot for L’Uomo Vogue, photographed by Caitlin Cronenberg, daughter to his Cosmopolis director David Cronenberg, it seems that Robert’s channelling his character’s Gothic roots, donning a lot of leather and heavy spikes. 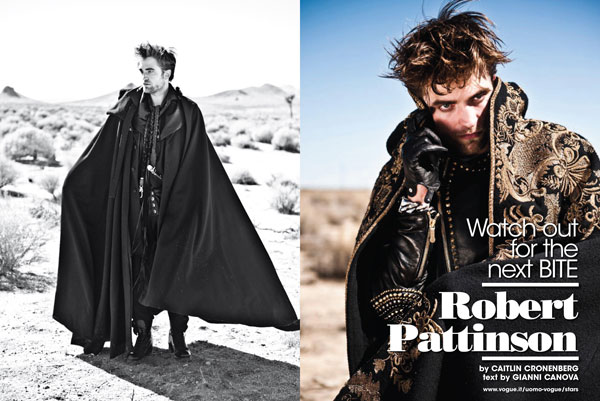 With his trademark wildly coiffed locks and sporting some serious scruff, Robert stares intensely into the camera as he wears a heavy patent leather sleeveless trench coat adorned with oversized spikes and bird skulls. In another snap, the actor hides under a matador style cape worn over a motorcycle leather jacket.

Currently in the midst of his final promotional tour for the last instalment of the Twilight films, Robert stopped in on the Jimmy Kimmel show earlier this week.  In a humorous interview, the actor revealed that he really enjoyed sky-diving in Australia or “on Australia”; as he put it.

“I loved it,”; he told Jimmy, adding morbidly, “That’s also how I want to die, I thought…I’m glad I’m doing it tandem as I wouldn’t pull the shoot.”;

“I felt relaxed, I want to go straight back up again,”; Robert continued.  And as for his scream, “It was more of a guttural sound, like Ted Levine from The Silence of the Lambs.”;