Congratulations are in order for Liv Tyler!

The Leftovers star is engaged to her boyfriend, sports agent David Gardner.

The two have apparently been engaged since Christmas but have kept the news private, according to Us Weekly. 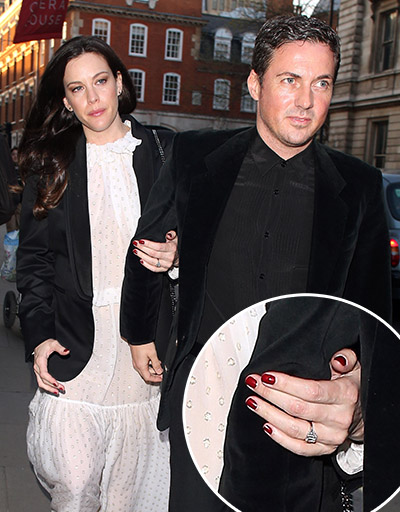 The 38-year-old actress shared a sweet snap of her baby boy’s hand holding an anchor pendant to announce his name shortly after his arrival.

//platform.instagram.com/en_US/embeds.jsThen in August, Tyler showed us our first real close-up of Sailor.

//platform.instagram.com/en_US/embeds.jsThis is the second marriage for both Tyler and Gardner. Tyler was previously married to musician Royston Langdon, with whom she has a 10-year-old son, Milo. Gardner, who is best friends with David Beckham and Kate Moss, was married to English actress Davinia Taylor, who he shares a 7-year-old son, Grey, with. PHOTOS: Steven Tyler Shares Photos From Grandson’s Birth Tyler proudly showed off her brood of boys last week to celebrate Gardner’s birthday.

Happy birthday baby @davidgardner A photo posted by Liv Tyler (@misslivalittle) on Sep 17, 2015 at 6:02am PDT

We can’t wait to see the bride-to-be on her special day! In the meantime, see even more amazing celebrity engagement rings in the video below.