Taylor Swift is building quite the “reputation” as a kind soul.

The “Delicate” singer spent time with a special eight-year-old fan at the Arizona Burn Center in Phoenix on Saturday. 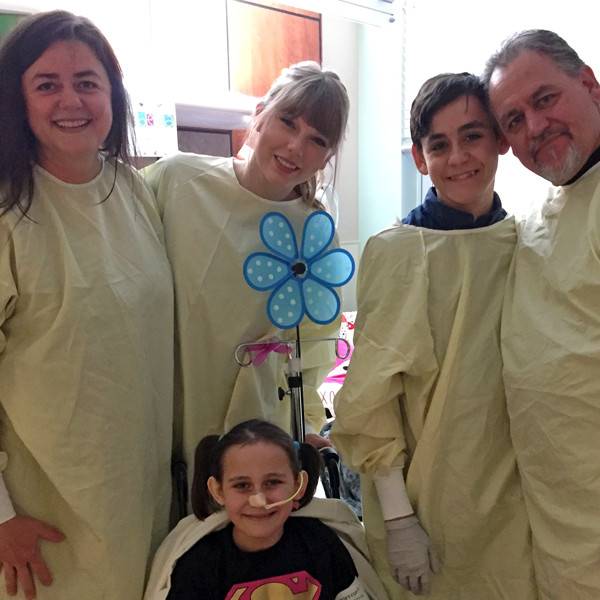 Little Isabella McCune was unable to attend Swift’s “Reputation” tour on May 8 in Glendale after suffering serious burns in an accident in March, according to AZ Central.

The eight-year-old sent a touching video to Swift, explaining the situation and asking the singer to stop by for a visit: “I heard you were here, and I wanted to visit you but maybe you can come and visit me. So maybe that can happen.”

RELATED: Taylor Swift Reacts To All The Love For Writing Sugarland’s ‘Babe’

Swift, 28, took photos with Isabella and her brother Zachary, Isabella’s parents, and the hospital staff on hand.

And the good deeds did not end there. Swift also invited adoptive and foster family members to her final dress rehearsal for a private concert, according to the Arizona Republic.

When @taylorswift invites you to her final dress rehearsal, you go. We couldn’t bring cameras in, just know that if you are able to see her #reputationstadiumtour DO IT! She was such a gracious and generous hostess…complete with a pizza party and photo op afterward. #thankyoutaylorswift #thankyouazafap #fostercare #adoption #blessed #onceinalifetime #hurshfamilycircus #cheaperbythedozen The munchkins wrote thank you cards to Miss Swift and I was blessed to be able to give them to her kind daddy who promised to bring them to her before the show. He gave a TS guitar pic to each of the kids. ❤️❤️

@taylorswift13 You are incredible to do so much for adoptive and foster children. We adopted my daughter from foster care two years ago. She is 9 years old now. I can’t tell you how much this meant to her. She would not let your photo gift out of her sight. It made her year! pic.twitter.com/gb654zTZvP

Thanks @taylorswift13 for allowing us to be the first to see your #reputationtour ! For foster/adoptive families she gave us a private show, freedom to roam around the Cardinals stadium, bought everyone pizza, picture with us, and everyone got an autograph. Our girls loves you! pic.twitter.com/4oIgLtK4oZ

I have to say too that @taylorswift13 not only sang for two hours but tried to give every single person hugs with big smiles. Crazy how genuinely she cares for everyone and it shows. #reputationtour

The 10-time Grammy winner’s “Reputation” tour kicks off on May 8 with supporting acts Camila Cabello and Charli XCX.