Skeet Ulrich is not mincing words when it comes to shutting down rumours about his “Riverdale” co-star and singling out his online stalkers.

Fans have been speculating that Ulrich and Vanessa Morgan are in a relationship after it appeared the actress was living with him while she gets a place of her own.

RELATED: Spoiler Alert: ‘Riverdale’ Season 2 Finale: Here’s Why A Certain Someone Was Arrested And What’s Next in Season 3!

“Vanessa and I are not dating,” he writes in the comments section of his Instagram. “We are friends, just like the rest of our cast and we always have each other’s backs.”

The 48-year-old actor, who plays F.P. Jones on the series, also called out several of his online harassers.

“I have had an internet troll/stalker for far too long now,” he writes, adding that he’s spent “thousands” of dollars on lawyers and police protection from a woman named Maria who he alleges has multiple aliases and accounts. 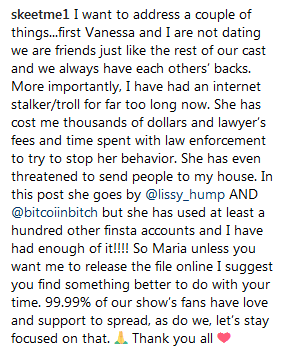