Anne Hathaway and the rest of the “Ocean’s 8” cast appeared at a press conference on Tuesday to promote the upcoming all-female reboot of the classic caper flick, and gushed about the experience of working with an all-female cast featuring some of Hollywood’s biggest stars.

Discussing her cast mates — Cate Blanchett, Sandra Bullock, Sarah Paulson, Mindy Kaling and Awkwafina were also on hand — Hathaway said that working with such an amazing group of actresses was a career highlight.

RELATED: Mindy Kaling Says She Had To ‘Spin A Web Of Lies’ To Hide Her Pregnancy From ‘Ocean’s 8’ Co-Stars

“I’ve been really lucky, I’ve been able to work with a lot of great women but there’s usually just one or two of us,” she said at the press conference, reports People.

“The idea that we could all bring all of the experiences we’ve ever had and bring it into this shared pool — and all then collectively become better because we’re all just together,” added the 35-year-old Oscar winner.

“One of the first things I remember was feeling safe and feeling like I was with people that I was so proud to be amongst — while having the best time of my life, just learning, and enjoying the view,” she continued. “It was incredible.” 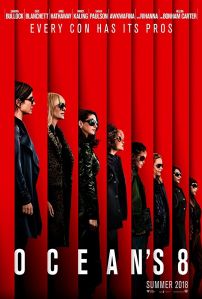 While she doesn’t endorse the idea of pulling a heist, she does agree with the themes of female empowerment that resonate in the film.

Added co-star Sandra Bullock: “Also just women taking care of each other. Women being good to each other. Women stepping back and letting the more gifted step forward in the heist and recognizing talent and saying go out and shine, I got your back.”