Jessica Alba graces the cover of the July 2018 issue of InStyle, and the actress/entrepreneur has a lot to say about what it’s taken to build her Honest Company from idea to billion-dollar business.

Despite the company’s success, Alba tells InStyle that Honest is “still in our infancy as a brand… It was really a startup until our amazing CEO, Nick Vlahos, came on board a year ago. He knows how to scale a CPG [consumer packaged goods] company. There is so much potential. And with my acting career, I feel like I’ve just scratched the surface as well.”

RELATED: Jessica Alba Opens Up About Family Life, Insists She Turns To Wine And Not Social Media When She ‘F**ks Up As A Mom’

A large part of the company’s success arguably rests with Alba, 37, who recalls how she first learned to harness the power of her own charm.

“I think I started to explore the idea of charm when I was 16 or 17,” she explains. “That was when I realized I could get away with some things… When I was younger, though, I didn’t know how too turn it on for the camera, only in person. That was my problem.”

One of the biggest motivating factors that drew her in front of the camera, she reveals, was the lack of Latina representation onscreen. 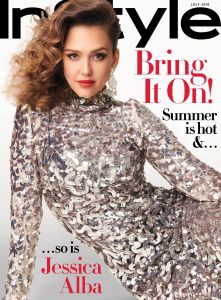 “What drove me was that I felt like I wasn’t represented,” she says. “There were a lot of girls out there who looked like me and weren’t represented in pop culture, you know? … When I started, I was labelled ‘exotic’. That was it. It was like you had to be mysterious and sexual. Back in the day, if you were Latina, it was always a stereotype.”

During the extensive interview, Alba also touches on her parenting style, which she admits is unique: “I have this terrible habit: Whenever my kids ask me to find something, they’re like, ‘Mom, where’s my…’ you know, backpack, toothbrush, whatever. And I just say, ‘Up your butt,’ and that’s probably bad parenting.”

You can read more with Jessica Alba in the July 2018 issue of InStyle, which hits newsstands on June 8.