Mr. Dressup Remembered on What Would’ve Been 85th Birthday 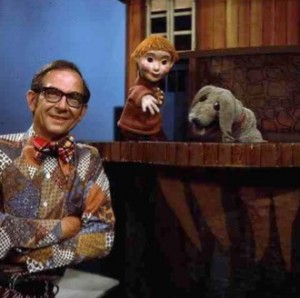 r of the special day, Google celebrated the children’s entertainer with his very own Google doodle.

Featured in the special illustration are Mr. Dressup’s puppet pals Casey and Finnegan, along with the magical tickle trunk.

But the iconic TV personality will clearly never be forgotten! And we dug into our vault to find a golden Entertainment Desk interview with Ernie and the late Global TV personality, Bob MacAdory, that was shot back in 1996 after the kids show went off the air.

Recalling how the famous “tickle trunk”; came about, Ernie told Bob he was trying to think of a prop when the show started and “all of a sudden “Tickle Trunk’ popped into my mind.”;

When thinking of his 30-year go at it, the entertainer revealed “where else could you have a nice job and have so much fun… and you didn’t have to grow up?”;