Fans of “The Bachelor” are used to seeing the drama play out on the screen, but it looks like there’s enough left over to spill over into social media.

In fact, E! News reports that “Bachelor” Nation has been paying close attention to a brewing Twitter feud between former contestants Raven Gates and Beka Martinez, both of whom competed (unsuccessfully) to win the heart of a Bachelor (Arie Luyendyk Jr. for Martinez, Nick Viall for Gates).

RELATED: ‘Bachelor’ Star Bekah M. Explains The Real Reason She Was On A Missing Persons List After Elimination

Apparently, the whole thing started when Martinez watched a recent episode of “The Bachelorette” in which Becca Kufrin confronted Colton Underwood about his relationship with former “Bachelor” contestant Tia Booth. While Colton insisted it was all over, Bekah wasn’t quite as certain, and took to Twitter to share her prediction that Underwood and Booth will reignite the flame this summer on “Bachelor in Paradise” as a publicity stunt to boost both their profiles.

Tia+Colton: “yeah Becca, we’re both 100% over each other! we’re TOTALLY not planning on getting back together/probably engaged the minute we’re in paradise (we’re gonna get so many followers from this manufactured narrative lol)” pic.twitter.com/xs642erU1a

This led Gates to chime in, slamming Martinez and kicking off a nasty series of back-and-forth tweets, most of which have since been deleted.

“Hey everybody!!” she wrote, sarcastically asking folks to follow Martinez on Twitter “so she can get those followers so she can stop talking s**t about her friends.”

RELATED: ‘The Bachelor’ Runner-Up Raven Gates Is Heading To ‘Bachelor in Paradise’

Martinez clapped back: “Girl I would never talk s**t on Becca because she’s as real as it gets. That’s the reason I tweeted that thing about colton and tia in the first place, because it looked like they both played her on this one.”

Gates responded: “You know that tia didn’t. And you’re entitled to your opinion. I don’t like the situation either, but if you said you’d stop bashing Tia, then you should keep your word.” 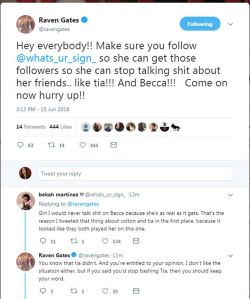 “How can people be so full of hate all of the time? Aren’t you tired??” Gates wrote in another tweet, also deleted. “How can you hate on your ‘friends’ constantly??”

Bekah replied, “Why’d you delete your first tweet that was directly aimed at me? Why don’t you just @ me?” 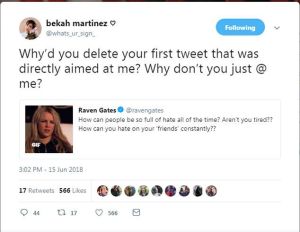 Gates then issued a tweet accusing Martinez of stirring the pot by tweeting something “rude & unnecessary to create drama,” revealing that she’d blocked her because “I don’t want to keep engaging with someone who will continuously drag her ‘friends.'”

Just so you guys know, Bekah tweeted something rude & unnecessary to create drama & I went to stick up for my friend who can’t respond right now. I decided to delete the tweets & I blocked her bc I don’t want to keep engaging with someone who will continuously drag her “friends.”

After Gates blocked Martinez, she continued the conversation:

we agreed to stop the back and forth then but this is a whole new level of shady and conniving. it really seems like both she and colton played becca on this one. i would’ve tweeted it even if she wasn’t filming right now. I don’t care to be friends with someone like that. https://t.co/gHHa3bmduT

1. keep acting like Tia and I were besties since that’s the best you can do here.
2. there are not enough twitter characters to address the rest of your self-contradicting bullshit. https://t.co/dJ7kgO8OUW

Martinez finally seemed to tire of the whole thing and decided to move on:

Martinez has since apologized to Booth, Underwood and Gates as she took to Twitter to take back the harsh words she said.

“Regardless of my feelings about the situation,” she wrote. “A sarcastic tweet is not the way to handle it.”

I woke up this morning realizing I regret blasting Tia+Colton on social media. Regardless of my feelings about the situation, a sarcastic tweet is not the way to handle it. There ARE less petty/immature routes to take, and I HAD promised Tia months ago I’d stop the shit-talking.

So I guess what I’m saying is I’m sorry. I got heated and caught up in what I was feeling and wanted people to hate on them cause I felt like the situation was unjust. It’s really not my place to be the justice police, as much as I wish it was.

To clarify, I could have still kept it real and spoken my truth in a less abrasive, less shit-stirring way. The issue is the way I handled it, not the content.

another thing I learned from this— y’all are a bunch of petty, tea-lovin’ shit-stirrers just like me 😂 but what else would I expect from bach nation? ❤️