“A transient was charged today with attacking and threatening actress Pauley Perrette in Hollywood on Thursday,”; reads the statement. “David Merck (dob 11/12/70) is scheduled to be arraigned today in Department 30 at the Foltz Criminal Justice Center in case BA441467. Prosecutors will ask that bail be set at $60,000.”;

“Merck allegedly grabbed the actress, one of the stars on NCIS, punched her and threatened to kill her before running off. He was arrested about an hour later. He is charged with one felony count each of making a criminal threat and false imprisonment by violence,”; adds the statement.

“If convicted, Merck faces up to four years in state prison. The case remains under investigation by the Los Angeles Police Department.”;

NCIS star Pauley Perrette has taken to Twitter to share details of being viciously attacked by a homeless man in Los Angeles yesterday, admitting the attack left her “shaken and traumatized,”; adding: “I’m only grateful to be alive.”;

The actress, 46, wrote about being assaulted and posted a photo of her letter on Twitter, describing the terrifying experience of encountering a violent and “VERY psychotic homeless man.”;

So, tonight was awful, life changing and I’m only grateful to be alive. It’s here: pic.twitter.com/vXIT1pkVRc

//platform.twitter.com/widgets.jsThe LAPD has confirmed that a call was made to police at approximately 5 p.m. (a friend of Perrette’s called it in), and a suspect was arrested about an hour later.

Merck has been booked for felony battery, but those charges could be expanded, as threats of murder can lead to additional, more serious charges.

Here’s Perrette’s account in its entirety, in which she admits “my life changed tonight,”; and concludes with the chilling sentence: “I almost died tonight.”; 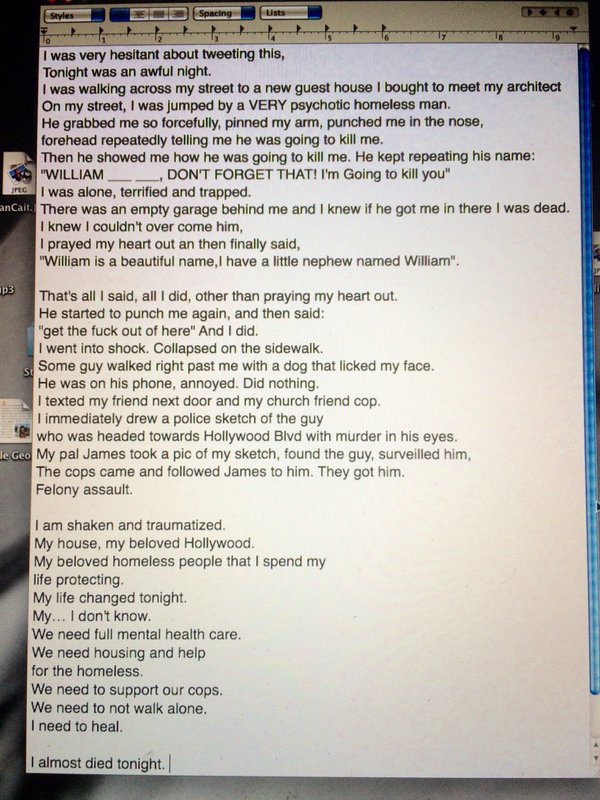