Lucy Hale Opens Up About Her Experience With Sexual Assault: ‘It’s Very Common’

Lucy Hale is opening up about her own #MeToo moment, revealing she has been the victim of sexual assault.

In an interview with Haute Living, the former Pretty Little Liars star admits that she’s managed to emerge “unscathed” from her experiences.

“I’ve experienced stuff on the small side, but assault is assault,” she tells the magazine. “I think there are a lot of people who have been intoxicated and taken advantage of. It’s happened to me and people I know. It’s very common. Luckily, I’ve been unscathed; nothing’s hurt me too badly.”

RELATED: Lucy Hale Plays ‘Would You Rather’ With BuzzFeed In Anticipation Of New Film ‘Truth Or Dare’

On living in Los Angeles, she says: “I’ve had super-dark times here, but it’s been a place that’s always had my back. I know it sounds weird, but I’ve always been at ease here. For me, this is it. I think I’ll always live here. I feel like I can be myself here.”

In January, Hale took to Instagram to post a cryptic message implying she had been the victim of sexual assault, then deleted the message soon after. 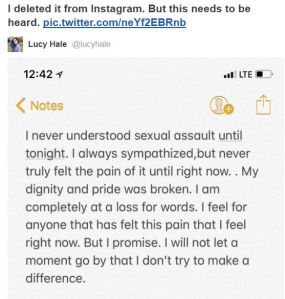