Did Rihanna and Marc Jacobs have drama during NYFW?

Fans are speculating that the designer pushed back his 6:00 pm spring/summer 2019 show by an hour and a half due to Rihanna grabbing the last 7:30 pm time slot for her Savage x Fenty lingerie show on Wednesday.

For many seasons now, Jacobs has been the last designer close out fashion week in a meticulously punctual manner, starting the show right on the dot. This time, many guests left their seats after waiting for more than an hour.

Vogue Editor-in-Chief Anna Wintour was spotted behind the seats occupying herself on her phone while waiting for the show to start.

While many thought the designer was peeved because his thunder was stolen, Jacobs insists that was not the case as he responded with an apology on Thursday via Instagram. He explained he completely intended for the show to start on time but unforeseen circumstances resulted in it being pushed back.

I sincerely apologize to anyone and everyone who was inconvenienced by my lateness at our Spring/Summer 2019 fashion show. For anyone interested, below is not a list of excuses but rather a list of facts. I fully understand people have plans, lives, commitments, flights, families to return to, etc and that I fully RESPECT. I’ve heard, read and reflected on your frustration, anger and outrage. If you choose to read the below, I hope that you can find your own place of understanding. 1. The night before the show at midnight, I believed that we would absolutely be starting at 6pm, as planned and it was my intention to do so. 2. At 3:30pm on the day of the show, I became aware that we would most likely be an hour late. In good faith and hope it was communicated that the show would start at 630pm and that was a mistake. 3. After years of being beyond punctual and once again, with every intention of remaining so, the fact is, more is always expected from us with fewer and fewer resources. That is not unique to me personally or us as a company. I have learned that I need to adjust to our realities. 4. It was my wishful thinking that we could accomplish all that needed to be done for this show with the circumstances we faced. I was wrong. Not because everyone didn’t make every effort or give it their all and more, life is just that way sometimes. I’ve always been told that, “if you want to make God laugh, tell him your plans.” With our shows, I always strive to present 7-10 minutes of live fashion theatre that hopefully makes some kind of statement or touch the audience in some way both aesthetically and emotionally. I think we all have to be a little more sensitive and flexible to the fragile state of the live experience. I hope anyone reading this will reflect on my thoughts as I have on yours.  Sincerely and respectfully, Marc

As for the Rihanna rumor? Jacobs politely shut it down when responding to comments saying, “I never want to hurt or harm ANYONE. I am very sorry and love Rihanna.” 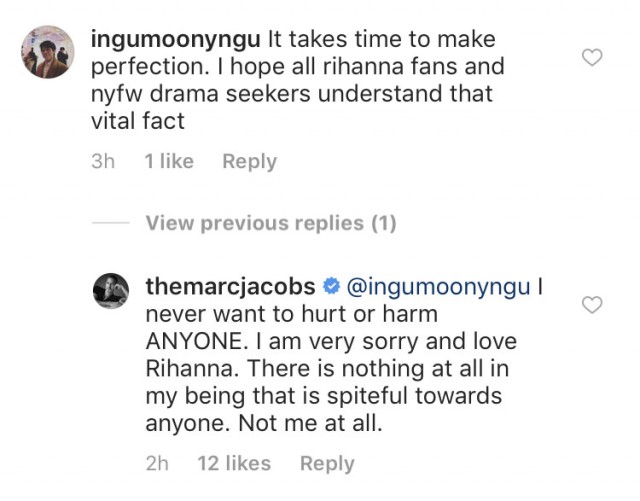 With all the craziness and chaos fashion week brings, it isn’t uncommon for shows to not start on time. With so many people, clothes and logistics involved, not everything can go according to plan. Nevertheless, Jacobs’ creations were a showstopper thanks to his stunning designs of colorful ’80s-inspired, voluminous, over-the-top pieces adorned with ruffles and feathers that made it worth the wait.

Gigi Hadid Ends NYFW With a Bang in a Blingy Jumpsuit — See Her Look!

Selena Gomez Steals the Show in Gold at NYFW