Turns out Rob Doherty casting a female Watson in his adapted Sherlock Holmes series Elementary wasn’t intended to stick. Doherty confesses to The Hollywood Reporter in their Rule Breakers 2012 issue that his decision to make Dr. Watson a woman “started out as something of a joke.”; 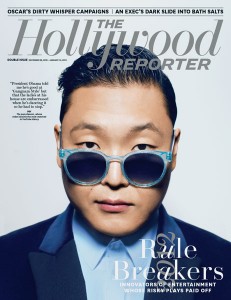 “; I thought to myself, “What would make Holmes crazier than taking the figurative rock he has in Watson and making him a woman?’ I scribbled it down and then went back to my research,”; the 38-year-old Elementary show runner says of his initial research.  After which he came across a handful of experts who had written up psychological assessments of Sherlock: with one of them noting his aversion to women: “The more I thought about it, the more I wanted to try it.”;

And the result – casting Asian-American film star Lucy Liu as the first female Watson, opposite Jonny Lee Miller’s eccentric Sherlock has an impressive 13.9 million viewers tuning in weekly.  Making Elementary the No. 1 new series in total viewers this fall and in February, you can expect those numbers to possibly go up as the hit show has nabbed the coveted post-Super Bowl time slot.

And what do the show’s stars, Lucy and Jonny think of the success? “To me, one of the best things you can do in this profession is to take a risk,”; Miller says. Meanwhile, Lucy, who not only plays Watson, but also sober coach to Jonny’s recovering addict Sherlock, agrees that a tweak in the foundation can liberate a storyline: “There’s an endless supply of unpredictability that we can delve into and we can change and add. It will still be a pound cake, but it could be marble, it could be lemon, it could be poppy seed.”;