Warning: Some may find the following images uncomfortable.

Ricky Gervais joined celebs calling for trophy hunting to be banned as social media slammed the Idaho fish and game commissioner, Blake Fischer, after he shared gruesome photos of his trip to Africa.

According to The Idaho Statesman, Fischer sent an email to more than 100 recipients, in which he boasted killing at least 14 animals, including four baboons, a giraffe, and a leopard during a trip to Namibia. 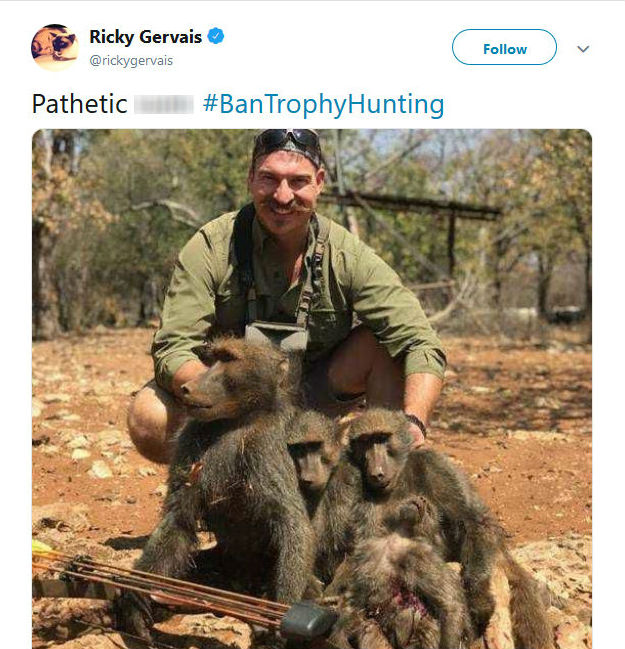 Prior tweet: the Idaho Fish and Game Commissioner Blake Fischer. That’s the monster. REMOVE HIM NOW! This is NOT A GAME! Monster.

We all know game hunters are big cowards and the scum of the earth but now every man, woman, child & pet in Idaho will sleep with one eye open after seeing US Game Commissioner Blake Fischer’s face as he sodomizes the leopard he just murdered.

Change.org also shared a link to a petition, which had already been signed by hundreds of people, calling for Fischer to be fired.

In just a few hours hundreds have signed this #animalrights petition calling for Blake Fischer, an Idaho wildlife official who went on a #trophyhunt and killed a family of baboons, a leopard, a warthog and more, to be fired. #animals #trophyhunting https://t.co/e8RXsyAS71

RELATED: Bradley Cooper Is Getting A PETA Award Because His Dog Is In ‘A Star Is Born’

According to The Idaho Statesman, Fred Trevey, who was a commission member from 2007 to 2015, has reportedly asked Fischer to resign.

He’s said to have written in an email: “I’m sure what you did was legal, however, legal does not make it right.

“Sportsmanlike behaviour is the centre pin to maintaining hunting as a socially acceptable activity.”