Armie Hammer was slammed on social media Monday for suggesting celebs were making Stan Lee’s death all about them by sharing pictures with him.

It was confirmed earlier in the day that Lee had passed away aged 95; it wasn’t long before tributes all over the world poured in.

Many stars who had worked with the Marvel founder shared snaps alongside their tribute message. However, Hammer insisted this was an incredibly selfish thing to do.

“So touched by all of the celebrities posting pictures of themselves with Stan Lee,” Hammer sarcastically wrote in a now-deleted tweet. “No better way to commemorate an absolute legend than putting up a picture of yourself.”

“Walking Dead” star Jeffrey Dean Morgan was one of the people who hit out at Hammer for the tweet, accusing him of attention-seeking.

“Looks like you found a way to use others ways of mourning and their memories to draw some attention to yourself,” Morgan tweeted. “You sound like a real a**hat.” Morgan later deleted the tweet.

The “Call Me By Your Name” star then replied to numerous social media users who called him out over the comments:

If Stan impacted your life (ie. All of our lives) with his work, post his work that touched you the most. Posting a selfie makes his death about you and how cool you felt taking a picture with him.

If your answer is “post a selfie” then I think we need a cultural revamp across the board.

He was a fan of Mark Ruffalo’s post though:

Actually, yes. This was an example that stood out and made me think his post was actually about Stan.

sis they’re remembering their experience with him, it is not that deep

Everyone greives differently; he obviously believes that posting a pic of his work would be better BUT also posting a pic with him is harmless. Ppl are remembering the enjoyable moments they were able to have with him while he was still alive.

so…? if people have met him or knew him during his life what’s wrong with bringing up that good memory as a way to remember him and all that he’s done….?

-at a funeral-
grieving person: I remember my father’s last words to me-
armie: STOP MAKING EVERYTHING ABOUT YOU

Hammer’s tweeting even warranted a response from “Walking Dead” star Jeffery Dean Morgan, who sniped in a since-deleted tweet that Hammer sounds “like a real asshat.” 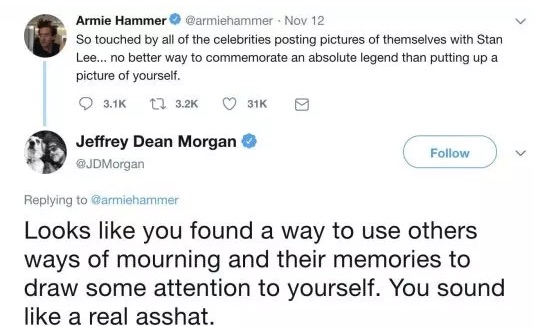 On Thursday, Hammer returned to social media — this time to apologize, and even thank Morgan for his “asshat” comment: