Memorable Moments From The 2013 Golden Globes

Tina Fey and Amy Poehler brought a delightful amount of sass and light-hearted comedy to last night’s Golden Globes. The duo was funny, smart and managed to get in some decent digs with ease and finesse, unlike some previous hosts. In fact, the only criticism that they got was that they weren’t on stage enough. 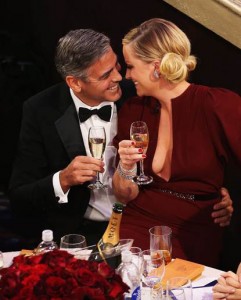 While centring out director Kathryn Bigelow, Amy  gave probably the line of the night, saying, “I haven’t been following the controversy about Zero Dark Thirty but when it comes to torture, I’ll trust the lady who was married to James Cameron for three years.”; Whereas Tina decided to hit ’em where it hurts, and by ’em we mean James Franco. “I have never seen anyone alone and so abandoned like that since you were on stage with James Franco at the Oscars,”; Fey said to Anne Hathaway about her performance in Les Miserables.

Amy got in a few more punches than Tina, canoodling with George Clooney during her shot for Best Actress in a Television Comedy or Musical, and finishing Tina’s rant at the end of the show: “Everybody’s getting looser here, now that we’re all losers,”; with, “Taylor Swift, you stay away from Michael J. Fox’s son! Or, go for it.”;

The dynamic duo didn’t make the night what it was without a little help though, here are some more memorable moments from last night’s broadcast:

Jodie Foster accepted the Cecil B. DeMille award for lifetime achievement with a speech

that will be talked about for years in Hollywood.  “I guess I have a sudden urge to say something that I’ve never really been able to air in public,”; the actress teased.  “So, a declaration that I’m a little nervous about but maybe not quite as nervous as my publicist right now, huh Jennifer?  But I’m going to put it out there, right?  Loud and proud, right? So I’m going to need your support on this.”;

And what was all that build up for?  “I am single, yes I am, I am single,”; the actress said and then proceeded to make what sounded like a plea for stronger celebrity privacy laws, and a subtle retirement statement.  “This feels like the end of an era and the beginning of something else. Scary and exciting and now what? Well, I may never be up on this stage again, on any stage for that matter.”;  Good news, Jodie told reporters backstage she wasn’t quitting, leaving room for more epic acceptance speeches from the actor, director and mother of two. 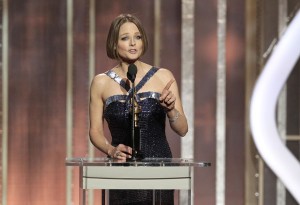 But Jodie wasn’t the only one to make the audience gaffe during an acceptance speech. Jennifer Lawrence started trending on Twitter after punching out “I beat Meryl”; as the first words after winning the award for Best Actress in a Motion Picture Comedy or Musical. And Ben Affleck, who picked up two awards on the night, had everyone swooning when he thanked his wife Jennifer Garner. “I adore you. I love you so much,” he swooned. “Thanks for sitting through this. You are my everything.”;

Adele picked up an award for her work on Skyfall“s soulful theme song, giving James Bond himself, Daniel Craig an impromptu high five after being announced as the winner for Best Original Score.

Cast your vote, and tell us what you’re favourite memorable moment from the Golden Globes was!

Other headlines in your Entertainment Fix: Britney Spears calls it quits with fiancée Jason Trawick, while Jason Sudeikis gets engaged to girlfriend Olivia Wilde.