Blac Chyna has come out swinging for ex Rob Kardashian, currently in the midst of trying to convince a judge to reduce the $20K/month child-support payments he makes for their two-year-old daughter, Dream.

The 30-year-old makeup mogul was clearly not impressed with her former boyfriend, 31, who claims in a court filing that he’s no longer able to afford the child support payments he agreed to in a settlement reached last year. The “Keeping Up With the Kardashians” star is asking that agreement be amended and his monthly payment lowered due to his claims that he “can no longer afford these orders.”

Chyna, however, is not buying Kardashian’s claims of poverty, and took to Instagram Story on Monday to question why “my children aren’t supposed to live the same lifestyle as their fathers.” 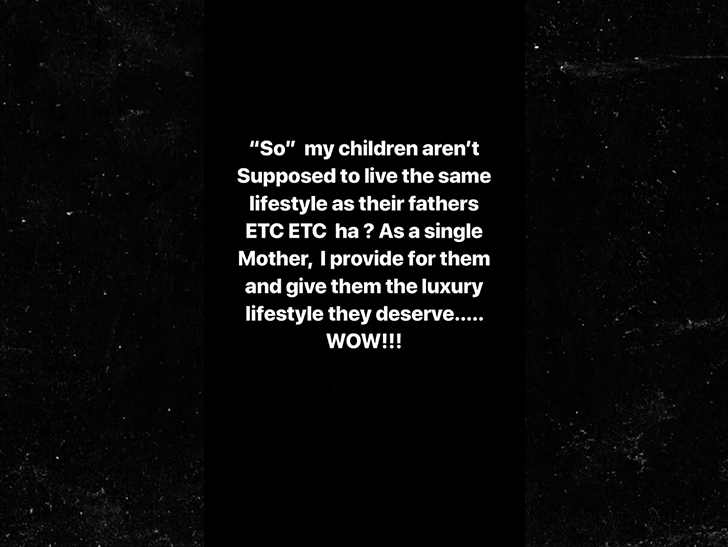 “We believe Rob Kardashian has deliberately retreated from social media to reduce his income so that he can pay less child support,” said Bloom in a statement to ET. “Poor little rich boy. What kind of father doesn’t want to support his own baby?”

“Rob and Kris Jenner have also been dodging their depositions,” Bloom continued. “They can run, but they can’t hide. Like all other litigants and witnesses, eventually they will have to show up and answer questions about where all of Rob’s money has gone. We’ll get a court order requiring them to come to my office and answer questions under oath if necessary. In the meantime, Blac Chyna continues to work hard as a single mother supporting her children, as she has always done, whether Rob chooses to help or not.”