Samantha Markle Blasts Nephew’s Claims That She ‘Sold Out’ Meghan Markle: ‘Who The Hell Is He?’

Samantha Markle is clapping back at comments made by her nephew, Tyler Dooley, claiming that she and his father, Thomas Markle Jr., “sold out” her half-sister Meghan Markle due to her romance with Prince Harry and subsequent marriage.

In an interview with the Daily Mail, Dooley — who parlayed his family ties to the Duchess of Sussex into a role in a U.K. reality show — blasted his aunt and his father.

“My father and aunt Samantha have sold my grandfather out, sold my family out, sold Meghan out,” he said. “It has been hard to deal with.”

RELATED: Meghan Markle’s Nephew Tyler Dooley Cast in New MTV Reality Show ‘The Royal World’
>Dooley, who is one of the stars of “The Royal World” (a “Real World”-inspired series featuring young people with ties to the British aristocracy), had nothing good to say about Samantha’s frequent rants about half-sister Meghan.

Describing her behaviour as “embarrassing and sad all at the same time,” he added: “It was never like we had a super tight-knit family before to be honest. But the fact that now the whole world gets to see how my father or aunt Samantha behaves, it is like an open wound for everyone to see.”

Dooley continued: “That’s the hardest part, the fact that there is no privacy. It is hard to deal with.”

His aunt Samantha, however, took issue with his comments, firing back in a Twitter rant from her private account, blasting Dooley for “embarrassing this family especially since he is not even a real Markle.”

She continued, “He has been our there calling the Markle’s [sic] toxic yet insists on using the name. He does not have a relationship with my dad and only saw Meg when he was six a couple times.” 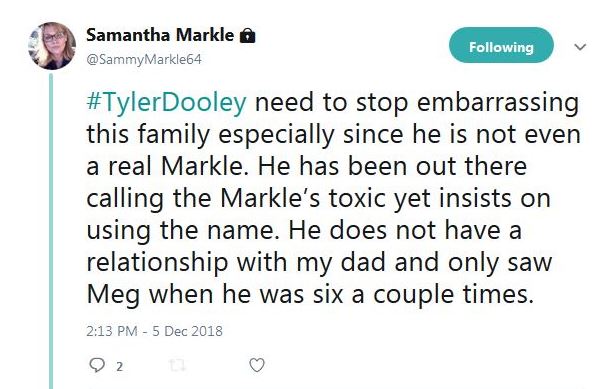 In additional messages, reports The Inquisitor, Markle continued to blast with both barrels. “Tyler claims that other Markles cashed in but he cashed in bigger than anyone with his marijuana and his television show and he’s out there slamming us,” she added, following up by claiming Dooley barely even knows Meghan.

“Meg babysat Tyler when he was six. Twice. He does not know her at all,” she wrote, and then accused Dooley — who has a legal marijuana business — for “cashing in” by naming a strain of weed after the Duchess of Sussex.

“It’s funny he talks about cashing in yet he has Markel sparkle marijuana, he’s doing that show, and does interviews everywhere and sits out there calling the Markles toxic,” she wrote. “He’s cashed in more than anyone and he has not seen Meg since he was six. Who the hell is he?”

As usual, there has been no official response from Duchess Meghan or Kensington Palace.