Jonah Hill marked his fourth time as host of Saturday Night Live in an episode that went for the jugular of Republican frontrunner Donald Trump.

Related: Stars Who Were Fired From “SNL’

In the cold open, this week’s Republican debate was mercilessly mocked with Trump (played masterfully by SNL announcer/former cast member Darrell Hammond) discussing the size of his manhood and declaring that “racists love me.”; Meanwhile, Hillary Clinton (played by Kate McKinnon) had the line of the night when she quipped, “Clowns to the left of me, jokers to the right, here you are, stuck in the middle with me.”;

But SNL wasn’t done with Trump just yet. In a faux campaign commercial, a series of seemingly average Americans discuss their admiration for the candidate, but are ultimately revealed to be Nazis, Klansmen and various racists — a vicious sketch that pretty much guarantees The Donald won’t be back to host SNL for a third time.

Hill, who kicked off the show by rapping Drake’s part alongside The Future (this week’s musical guest) in “Jumpman,”; was at the centre of this sketch about a high-school athlete who discovers his big win was an elaborate setup so the big loser won’t feel so bad about himself.

During his musical performance, The Future brought out a surprise guest to help him out on “Low Life”;: The Weeknd. 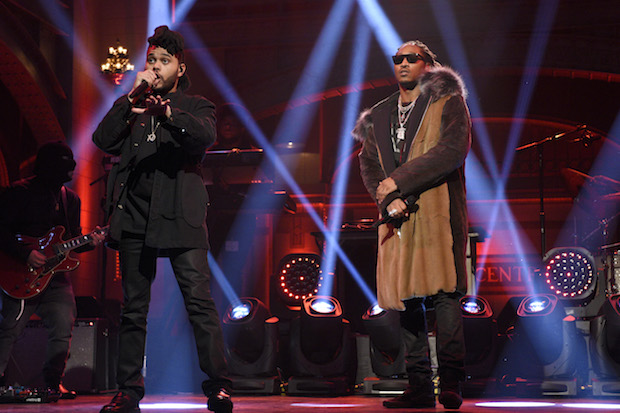 In this sketch, Hill plays a cater waiter at a business meeting whose enthusiasm for the food proves distracting to the people who hired him.

Hill also played the representative of a wealthy Middle Eastern sheik who bids a million dollars for the services of a teenage band at a school auction.

Hill and Cecily Strong brought out their finest Wisconsin accents in a bit about local news anchors in Fon du Lac.

Somebody’s been murdered at a British estate and, Agatha Christie-style, a detective must determine which of the suspects is the culprit. But first, everyone must make reference to the unnatural and unholy bowel movement made by Hill’s character.

Not quite “The Californians,”; but Southern California once again proved to be a source of SNL mockery in this sketch about a public access TV show hosted by laid-back SoCal stoners.

The episode’s edition of Weekend Update was highlighted by an appearance by Jay Pharoah, who delivered a dazzling bit featuring his pitch-perfect impressions of Eddie Murphy, Kat Williams, Kevin Hart, Tracy Morgan, Dave Chappelle and more.

Saturday Night Live returns with a new episode on Saturday, March 12 on Global when Ariana Grande does double duty as host and musical guest. In the meantime, you can watch individual sketches and full episodes online.