Ryan Gosling’s likeness is being used by Ontario’s Progressive Conservative party in a new fundraising appeal — which may come as a surprise to the Canadian actor, who was born in London, Ont.

As the Toronto Star reports, a recent email was sent out on behalf of Ontario Premier Doug Ford, leader of the provincial PC party.

“It’s been a while. Are you still with me?” reads the email, signed by Ford.

RELATED: Ryan Gosling Calls For Awareness On Stolen Minerals And Resources In Congo

“Ontario has a leader for the people. Doug Ford and the Ontario PCs are cleaning up Kathleen Wynne’s mess. Add your name if you’re with Doug!” the email continues, referring to the former Liberal premier who was defeated by Ford in the last provincial election.

However, the Star reports that the email has “yes” and “no” buttons for respondents to hit; clicking on “no” leads to a page titled “Change your Ontario PC Party email preferences.”

There, a black-and-white GIF of Gosling implores “Don’t go” (the clip is taken from the 2013 film “Gangster Squad”). 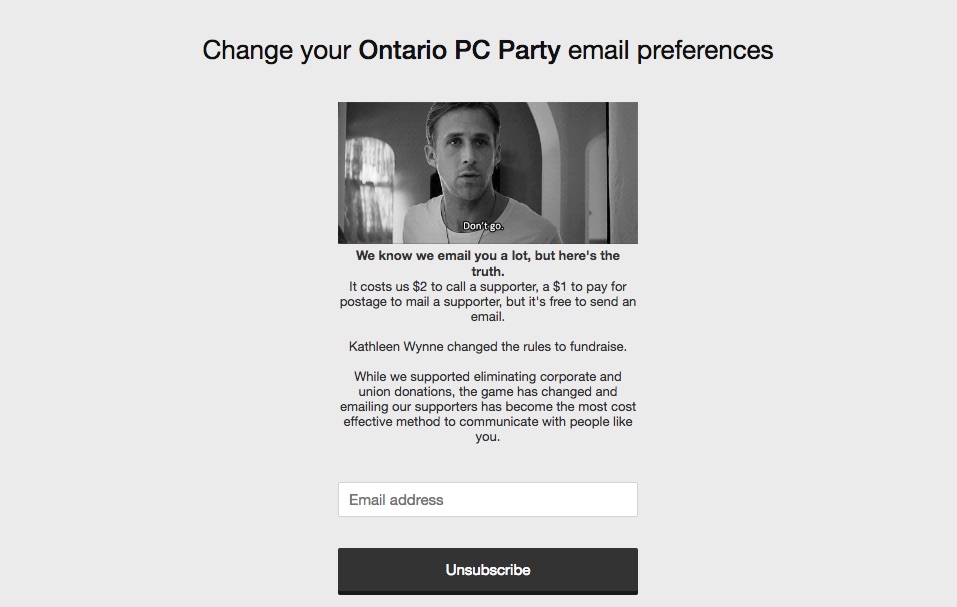 The PC party have quietly removed the black-and-white GIF of Gosling after about a week of its use.

The party have not indicated why the GIF was removed but experts say it could violate copyright law and Gosling’s rights.

McGill University law professor Allen Mendelsohn says, “You can’t just use somebody’s likeness for any sort of purpose in that regard without suffering legal consequences… Ryan Gosling and his representation would presumably not be happy to be used in this manner.”