WARNING: Spoilers ahead! Do not proceed unless you’ve watched the season five finale of Vikings!

Things got personal on Wednesday’s season five finale of Vikings.

The History show wrapped its penultimate season by taking the action back to where it all started, in Kattegat, as Bjorn (Alexander Ludwig) and Ivar (Alex Høgh Andersen) battled it out for the crown.

Things got personal between the brothers, as it was a tip from Ivar’s wife, Freydis (Alicia Agneson) that gave Bjorn the advantage he needed to take the throne. Ivar brutally strangled his wife in retaliation, though managed to escape Bjorn’s army, heading off to lands unknown. Ragnar’s oldest son, therefore, became King of Kattegat, with his brothers and his mother, Lagertha (Katheryn Winnick), by his side.

“She’s come back home,” creator Michael Hirst told ET of his decision to bring the shield maiden back to her home soil after her disappearance in Wessex earlier in the season. But Lagertha wasn’t the only character seemingly brought back from the dead. The epic season finale also included a moment with Bjorn and Ragnar (Travis Fimmel), despite the latter’s departure from the series in season four.

See what Hirst told ET about that blast from the past — as well as what he had to say about the show’s possible spinoff — below.

ET: This battle between Bjorn and Ivar felt more intimate and personal. How did you make it feel different?

Michael Hirst: Well, we do try, actually, to make all the battles different in some ways. We try to be innovative, because I think everyone on the production agrees that we’ve had enough of these CGI battles, where you just have hundreds and thousands of identical figures moving from left to right and then from right to left across the landscape. So [this time], we tried making it as real as possible… But more than that, I think we tried to personalize it, so that you’re seeing the battle from the point of view of characters that you care about. There was a lot going on in that battle that was also emotional and personal. It was brother fighting brother. It was being betrayed by the one person that you love; there were lots of substories.

The emotional charge was huge as well, because Kattegat is the soul of the Vikings, so fighting to get control of Kattegat is not just fighting to control a little bit of territory of a successful town. It’s fighting to claim the soul of the Vikings. And Bjorn wants to rule in a different way from Ivar, so it’s a truffle of ideas and people, but it does come down to the fact that you actually care about who wins, and for a long time in that battle, it looks almost certain that Ivar will win. And that’s one of the things that’s so extraordinary, that he’s betrayed in love, really, and loses the battle in an act of betrayal. But up to that point, it didn’t seem really any possibility of Bjorn winning. So it did make your heart beat a bit faster when you saw that Bjorn was going to lose. 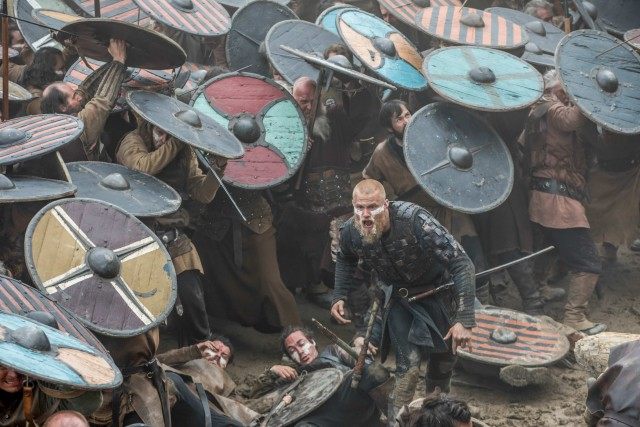 We had an appearance by Travis Fimmel as Ragnar, as well as a cameo by the Seer (John Kavanagh). Why include them in this finale?

One of the things is that Ragnar is never dead. He’s never really dead, because he’s in everyone’s memory. People talk about him. His sons talk about him, the Seer talked about him. The poets around the fire will talk about Ragnar and his fame, and that’s how Viking society worked. Even though the story has become much more about the sons and their exploits, I don’t want to lose Ragnar from the story, because he’s still a motivating force. He’s still a presence in the lives of the Vikings, and especially the sons who want to live up to his legacy, who want to be as famous as he was. So he’s always alive in the show.

In terms of [including Ragnar in] Lagertha’s vision, Lagertha is hovering in a state of life and death, and in that state, she sees a vision of Ragnar’s death. The director wanted her to feel slightly guilty, or to feel that it completed the circle, to have feelings about it, to feel physically involved in Ragnar’s death. So [having visions of Ragnar] performs two things: One was to remind the audience that Ragnar is always there, Ragnar is always present in the drama. But also, that he had a special place in Lagertha’s heart. Lagertha once said, “Whatever happens to us, whatever you do, we will always be together.” And so that scene is living up to that comment.

Ragnar also appears in that conversation with Bjorn, in which they discuss the burden of power. Being king is a new position for Bjorn — how will we see him in this new role?

We know that Ragnar himself never relished power. He didn’t really like power. He felt that power corrupted everyone and he’s kind of warning Bjorn again about that. I think Bjorn is different. Bjorn feels that he can rule justly, that he can correct and overturn the terrible things of Ivar’s rule, that he can open Kattegat up to the world again, that he can make it once more, a positive, democratic society. He has the best of intentions, but sometimes the best of intentions can lead to the hell that almost immediately, I think, Bjorn is going to be faced with.

He’s going to have some huge decisions as the new king, which aren’t easy decisions, morally or in every other way, they’re very, very difficult and important decisions. And if he gets them wrong, it’s going to influence his whole rule. So what he’s going to find is even though he wants to be liberal and tolerant and open and lots of good things, that actually being in power is not so easy, and maybe sometimes you do have to compromise, and maybe sometimes you do have to do things that you don’t want to do. A king must sometimes do things against all conscience if he wants to survive. So Bjorn is in for a bumpy ride.

Ivar went through a lot this season, with his child and with Freydis betraying him, and now he’s headed off to who-knows-where. What can you tell us about his journey?

What we’re going to see straight away in season six is different aspects of Ivar, of his character. He’s going to be very vulnerable. He’s going to be in a totally alien environment in which he is really trying to fight to stay alive. He is challenged like never before. He’s with someone who’s actually more powerful, more cruel, more ruthless than he ever was, and he has to try to survive this. But also, he forms a new relationship, which is completely different from any relationship he’s had before, in which he is fatherly, in which he’s emotional, in which he is sensitive, in which you engage with him in a totally different level. He’s still Ivar, he’s such a wonderful character, but he’s a different Ivar, he’s a more sympathetic Ivar and I think the fans are going to love these new faces that he wears, these new elements to his personality that you see. It’s really interesting. 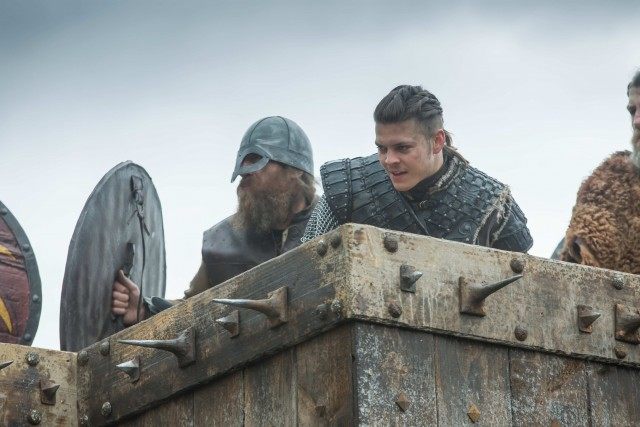 We left Floki is complete turmoil over in Iceland, after a cave seemingly collapsed on top of him. Is he alive?

Well, I can’t say… that would be a spoiler. [How we pick up with Floki] is something that must remain under wraps, because it’s so important and so emotional and so fantastic.

Death is always a possibility on this show, but especially now, when a lot of the characters are reaching an older age. It’s been five seasons, but we’ve seen Floki, Lagertha and others through decades of their lives. When did you start planning how we’d say goodbye to each of them?

The truth is that I always knew where I wanted the show to go, and I always knew, more or less, how it would end. In season six, we go to three completely new worlds with the Vikings, so it’s the most expansive season ever… but the show has grown. It’s one of the biggest shows in the world now, and I got the opportunity to finish my saga of Ragnar and his sons. That was my love, the story I wanted to tell and I was able to tell it, and we all agreed that it would end organically, and it would end at the end of season six.

History never canceled the show. That’s where we had arranged to end it, but because it’s such a big show and because it’s so popular, there’s a very big chance that you could call Vikings: Part 1 that there’ll be a Vikings: Part 2. I know History and MGM are already discussing this. It wouldn’t surprise me at all if they didn’t move forward with it. The only big difference — it would have the same creative team — the only big difference would be that I wouldn’t be the showrunner. That would be Jeb Stuart, the guy who wrote Die Hard, so he would do a lot of the heavy lifting. But the fans could be reassured that it’s not the end of Vikings. There’s 20 whole episodes to look forward to of season six, and those 20 episodes are the best 20 episodes we’ve ever shot. Believe me, if you have tears that weep, be prepared to weep them when you watch season six. 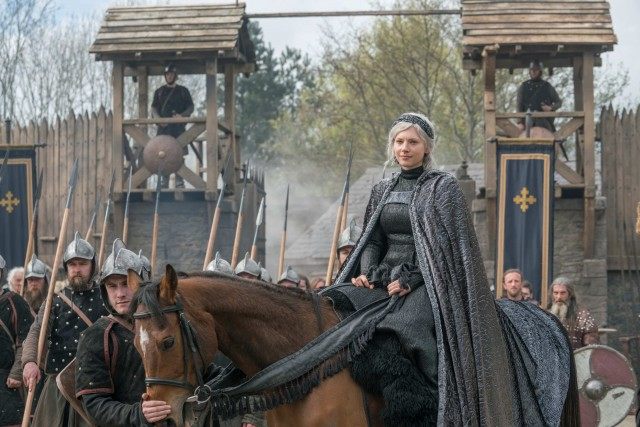 Will the spinoff take place in these other worlds you mentioned? How much of the show has been laid out?

I can’t tell you. I would love to tell you, although it’s a fairly early stage, but yes, we’ve worked out what we want to do, but I’m not in a position to say. But absolutely look forward to it.

We’ve got just one season of Vikings left. What can you tease about how this show will go out?

I think that one of the things that was most important to me was that I was able to pay off storylines that I planted way back in season one and two, and I was able to get right through to season six. And after all, in the end, I wrote 89 episodes of the show, so it was plenty of time in the end to resolve some of these big issues. But the relationship between Ivar and Hvitserk (Marco Ilsø) and why Hvitserk had jumped ship and really left the brother he loved more, Ubbe, behind and went with Ivar — that is resolved, and it was so amazing and so emotional. I think I’ve resolved the storyline of Hvitserk and Ivar, but also Ubbe (Jordan Patrick Smith).

Ubbe and Bjorn come into the show much more in the end of 5B, and share a stage with Ivar, and all their stories, good and bad, are paid off. So no one is going to be left [behind]. It’s not ambiguous. It’s a very satisfying finale. [Fans] might be weeping, but still, they’ll be happy that things will be resolved and all the storylines have resolved themselves. I felt very happy that I was able to do that, to properly pay off things I had set running seven years ago, and was able to do justice to all these great characters.

Season six of Vikings is expected to air later this year.