Steven Seagal is currently in Australia to promote his one-man show, “An Evening with Steven Seagal”, and his bizarre behaviour during media interviews has been raising eyebrows Down Under.

According to News.com.au, radio hosts Lawrence Mooney and Jess Eva of the “Moonman in the Morning” show took to the air on Thursday to recount the “odd” experience when Seagal visited the show.

“We had 15 minutes with him. It was odd from the get-go,” Mooney told listeners.

RELATED: Steven Seagal Will Not Be Prosecuted In Rape Case

“He was dressed in a Japanese kimono top, jeans, and there was a massive bodyguard there, a huge man,” he continued. “We went to hand him a microphone very early on and he goes, ‘I’m not holding that.'”

Eva interjected: “He did, he refused to hold a microphone!”

Added Mooney: “I was frightened, it was scary.”

One of the show’s producers even joked about the experience in a photo posted on her Instagram Stories. 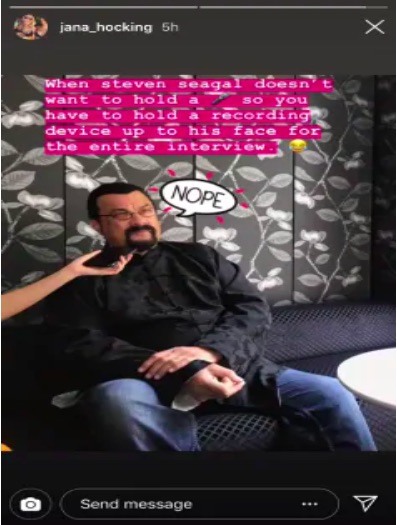 Also coming forward is Daily Telegraph reporter Jonathan Moran, who described his interview with Seagal as one of the “strangest” he’s ever conducted.

“Moments into the interview, he signalled a young Russian woman to scratch his right shoulder in a spot he clearly couldn’t reach,” Moran wrote. “She appeared to be a masseuse and there was a smell of Deep Heat, as if his shoulder was a trouble area.”

RELATED: Steven Seagal Storms Out Of TV Interview When Asked About Rape Allegation

According to sources, Seagal’s publicist is making it clear to interviewers that questions about sexual assault allegations that have been raised against the 66-year-old action star are strictly off limits, no doubt to head off awkward interviews like the one below, in which Seagal literally walked away mid-interview when the subject was broached: