It was likely very poor timing on the “7 Rings” singers side of things when Ariana Grande tweeted out “trash” just has Cardi B won.

Grande quickly deleted it but not before fans took screenshots of it.

ARE WE GONNA IGNORE HOW ARIANA JUS SAID TRASH AFTER CARDI WON THEN DELETED IT #Grammys pic.twitter.com/XwIsZjibDb

She also tweeted “f**k” right before her “trash” comment and followed with a third tweet saying “literal bulls**t.”

RELATED: Ariana Grande Wins Grammy But Isn’t There To Accept It

One person pointed out that Grande was likely not referring to Cardi B, but she was upset because her late boyfriend Mac Miller, who was nominated in the same category, did not win.

Grande responded, insisting that the deleted tweets had nothing to do with Cardi. “Nothing to do w her. good for her. i promise. i’m sorry,” she wrote.

Kehlani also turned to Twitter to discuss how Miller should have won, but added that Cardi was “absolutely deserving” and sticking with the trend, then deleted her comments.

People were upset that they invited Miller’s parents to the awards when they knew he wouldn’t win. Grande commented on a post pointing this out and then once again deleted her comments where she says that his mother “was gonna have a green suit made.”

RELATED: Ariana Grande’s ‘Thank U, Next’ Sets Multiple Records On Apple Music Within 24 Hours Of Release

“THEY INVITED HIS PARENTS OUT. NO.” she said in another deleted response to a fan. 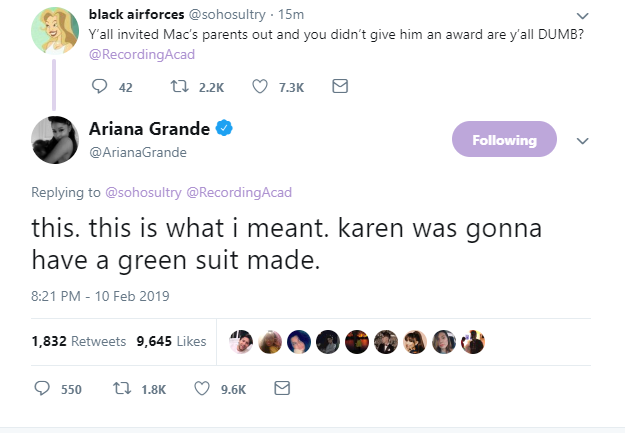 Miller was Grande’s ex who died of a drug overdose in Sept. 2018.

Fans came to Ari’s defence when people started to turn against her thinking she was talking about Cardi B.

“People are doing too much at ariana. she wasn’t even shading cardi,” wrote one person.

people are doing too much at ariana. she wasn’t even shading cardi 🤦🏽‍♀️

Ariana wasn't shading Cardi. She's saying it's messed up for them to invite Mac Miller's family out of they knew he was gonna lose.