Swimming sensation Ryan Lochte entertains us in ESPN magazine’s music issue by posing as the  floating “baby’ from Nirvana’s iconic Nevermind album cover.   In in the mag’s  behind-the-scenes video, the five-time Olympic gold medalist who,  opted to keep his briefs on in the water unlike the original, says recreating the image was a breeze: “Trying to perfect the perfect shot in the water was kinda easy for me, because I spend about four hours, every day of my life in the water.”;

Ryan, who poked fun at his persona by playing the “sex-idiot”; version of himself on 30 Rock, makes us laugh again with his analysis of the album cover.  “If you look at the baby, he’s happy…he’s chasing after a dollar bill which means he’s always on the grind,”; and adds,  “hopefully everyone’s reaction when they see it, they’ll be like, dang, look at that guy! I honestly think I nailed the shot.”; 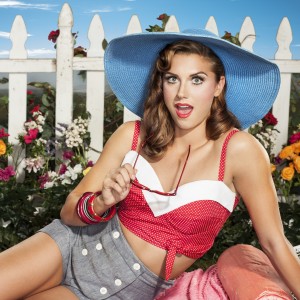 Also joining the magazine’s All-star line-up in the issue: Soccer player Alex Morgan who poses as Katy Perry from her One of the Boys album cover and Tampa Bay Buccaneers quarterback Josh Freeman who re-enacts Michael Jackson’s Thriller cover.

Checkout all of the athlete’s  tributes when the music issue hits newsstands February 8th.