Prince William and Kate Middleton, along with Prince Harry and Meghan Markle, have paid tribute to the 49 people that died in the horrific New Zealand shooting Friday.

The Duke and Duchess of Cambridge and Duke and Duchess of Sussex released a joint statement via Kensington Palace to send their condolences to the families and friends of the people who lost their lives in the Christchurch incident, writing that they had spent time in the “warm and generous” area.

The incident, which has been dubbed a terrorist attack by Prime Minister Jacinda Ardern, occurred at two mosques in the city.

William and Kate’s message read, “We have all been fortunate to spend time in Christchurch and have felt the warm, open-hearted and generous spirit that is core to its remarkable people.

“No person should ever have to fear attending a sacred place of worship.”

“This senseless attack is an affront to the people of Christchurch and New Zealand, and the broader Muslim community. It is a horrifying assault on a way of life that embodies decency, community, and friendship.

“We know that from this devastation and deep mourning, the people of New Zealand will unite to show that such evil can never defeat compassion and tolerance.

“We send our thoughts and prayers to everyone in New Zealand today.” 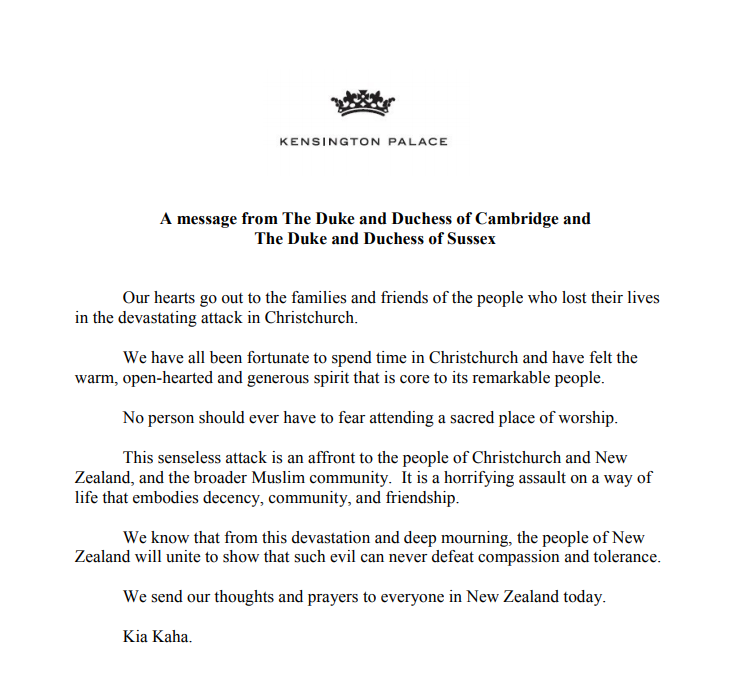 RELATED: Ariana Grande Announces She Is Performing In Manchester 2 Years After Tragic Bombing

The royals added the phrase “Kia Kaha” at the end of the note, which is a Maori message meaning “stay strong”.

The Queen and Prince Philip also shared a message via Twitter.

…I also pay tribute to the emergency services and volunteers who are providing support to those who have been injured.

At this tragic time, my thoughts and prayers are with all New Zealanders.