Rumours were flying in late April when DJ Zedd and model Olivia Culpo were spotted together at Coachella, and her ex wasn’t happy about it.

Football player Danny Amendola, who was romantically linked to Culpo as recently as January according to People, appeared to throw shade at Zedd in one of his Instagram Stories.

@DannyAmendola over here taking shots at @Zedd. Damn Amendola you petty af even after @oliviaculpo took you back. I’m weak this is too funny. 😂😂😂 pic.twitter.com/B0D8RH1sCA

In the video, Amendola is shirtless in bed with his laptop playing a scene from “Pulp Fiction” in which Bruce Willis is on-screen talking about “Zed’s chopper.”

Amendola later deleted the video, but it was captured by a fan who uploaded it to Twitter.

RELATED: Nick Jonas’ New Album Is All About His Breakup With Olivia Culpo

In a subsequent Instagram post — which he likewise deleted — Amendola addressed his on-again, off-again relationship with Culpo, which he says is now switched to the “off” position. In the post, reports People, Amendola blasts his ex as “f**ked up” and blames her constant publicity-seeking as the reason for their split.

“I believe there should be a boundary btw (sic) private life and social media. Olivia believes in fishbowl lifestyle. This fundamental difference was huge in our relationship,” he wrote.

“If you’re my real friend you know I’m private. My mother, brother, father and nephew are closest to me in this world and you don’t see one picture of them and that’s for their protection from those who criticize and judge. I believe in nailing picture frames on the inside of my house to remind the ones I love that I care,” Amendola continued.

“Olivia chooses and wants to be noticed on the internet and in Hollywood to make money. Which was hard for me to understand but quickly had to learn. Where as [sic] the cost of fame in this world doesn’t appeal to me,” he added.

“The only reason I’m writing this post is because, whether I like it or not, we lived in the public eye. Some of it is amazing! I’ve met some of the nicest people from all over the world and Olivia and I had some amazing times together… just like any other loving relationships we fought,” he wrote.

However, Amendola does shoulder some of the blame for their arguments. “A lot of time it was my fault bc let’s be honest I can be an idiot. But! Yup! She’s f**ked up too! and if you cross me I’m a hard mfer to deal with,” he stated. “The universe brought her and I together to enjoy life, love and learn. We celebrated that as often as we could. And the sex was f**king crazy too.”

Amendola then claimed that Culpo would become “so mad” at him when he didn’t share photos of her on Instagram, even though he thinks “this s**t is sometimes fake, sometimes toxic, but sometimes beautiful. And I felt like she had enough pictures online anyway.”

He added: “Truth is I have a whole cellphone of funny, embarrassing, sexy pics IG would love to have. However, living a public image isn’t my choice, it’s something I’ve learned to deal with.”

Amendola concluded by explaining why he’s decided to go public with his comments about Culpa. “Reading all these wild stories about her and I, and seeing Olivia with other men, I just wanted to personally clear the air out here,” he wrote, taking one final shot at Zed. “Not sure what’s in the future but the only thing I care about is her HAPPINESS. And if that’s dancing with scrony [sic] little f**ker, so be it. I’m happy too. With that said! Liv! My beautiful ex-Gf! Carry on IG.”

According to Just Jared, after deleting the post, Amendola backtracked on his comments about Culpo.

“What I meant to say yesterday was that the media and general public have no idea what goes on behind closed doors,” Amendola explained. “I don’t participate in fake intangibles that consume the public eye. I’m a private, single guy and if everyone’s happy – I’m happy. It’s not fun seeing your name attached to a click-bait headline story that is completely fabricated bulls**t..so when I saw this love triangle gossip I tried to clear the air. I take blame for the miscommunication! Good vibes only from me! ALL LOVE ❤️ always – DA.”

The NFL player first went public about his relationship with Culpo back in 2016. They split up in March 2018, but got back together later that fall.

At Coachella this year, TMZ obtained footage of Culpo dancing intimately with Zedd to Ariana Grande’s performance of “God Is A Woman”.

Fast forward to her birthday, Culpo and Zedd were once again spotted “getting cozy” Page Six reported.

The source added, Zedd “sat next to her for the entirety of the dinner. They were definitely into each other.” 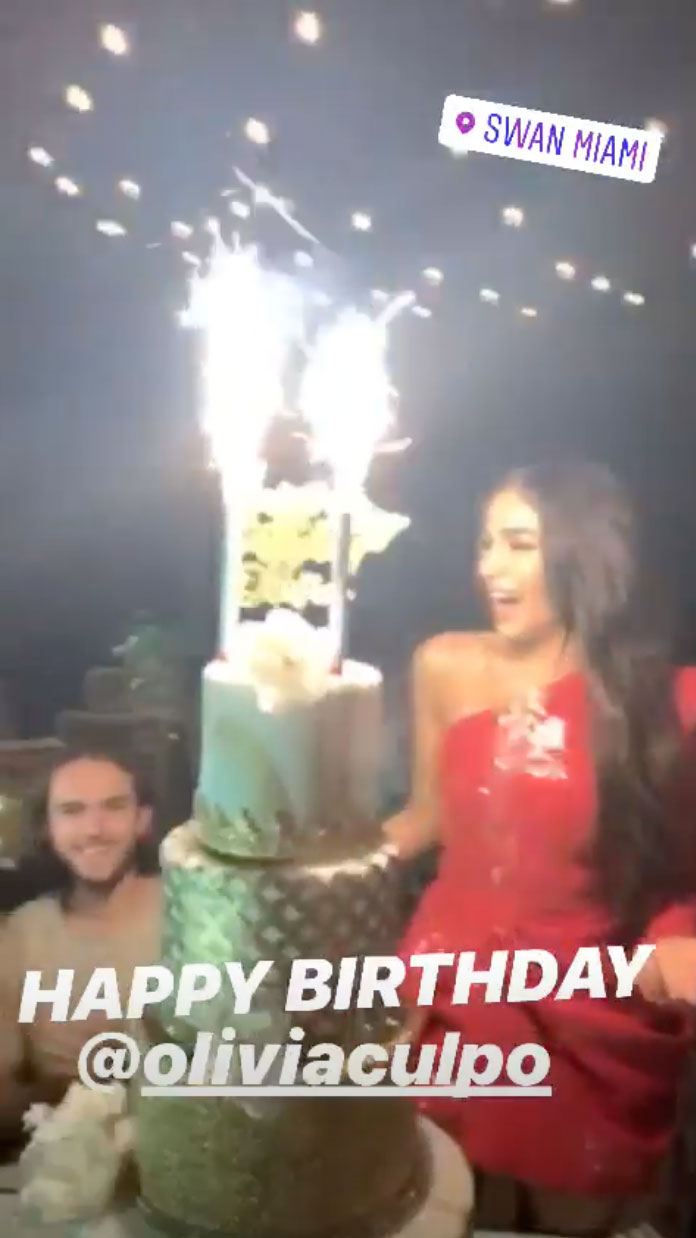 Is this real life? 🤩