Chvrches Are Getting Death Threats From Chris Brown Fans: ‘You May Have Proved The Point’ Lauren Mayberry Adds

After Chvrches used social media to blast Marshmello for working with Chris Brown and Tyga, the latter two artists are hitting back.

Brown and Tyga teamed up with Marshmello on “Light It Up,” a choice that Chvrches says they are “confused and disappointed by.”

RELATED: Marshmello And Chvrches Raise Money For First Responders In ‘Here With Me’ Behind-The-Scenes Video

“We are really upset, confused and disappointed by Marshmello’s choice to work with Tyga and Chris Brown,” the band said in a statement on Thursday. “We like and respect Mello as a person but working with people who are predators and abusers enables, excuses and ultimately tacitly endorses that behaviour. That is not something we can or will stand behind.”

Tyga commented on the post, writing, “Where all God’s children. Everyone makes mistakes no ones perfect. Let’s keep the energy positive.” 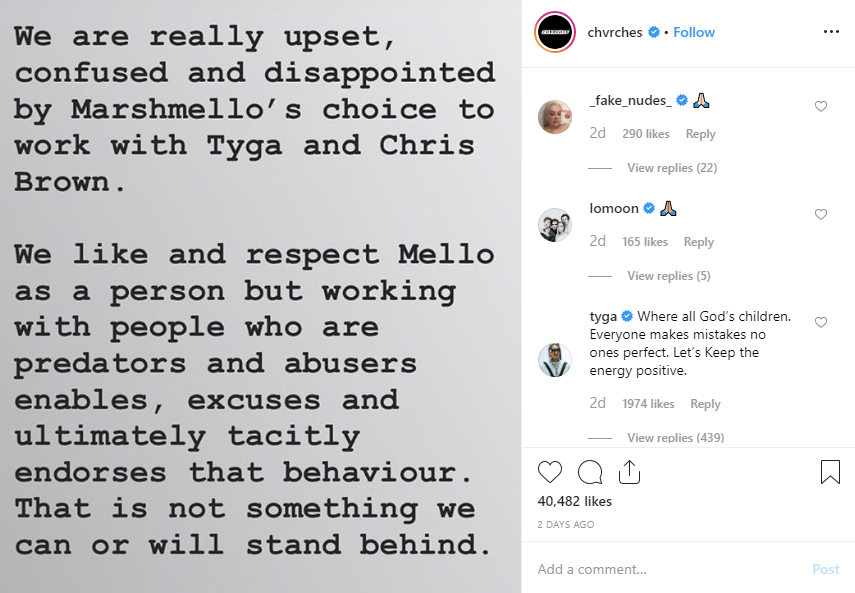 Brown was not as diplomatic about the situation. He commented another picture on Chvrches account, saying, “BUNCH OF LOSERS. these are the type of people I wish walked in front of a speeding bus full of mental patients,” Brown wrote. “Keep groveling over you own insecurities and hatred. IM BLACK AND PROUD. AND I KNOW ITS HURTS THAT U GUYS ARE STRUGGLING WIT LIFE OR PEACE SO U ARE FORCED TO SEE MY SUCCESS. You aren’t even #2 (REMEMBER 2nd place only means YOU LOST FIRST! TA-TA. GOODDAY PEASANTS”.

Chvrches’ original post stems from the abuse charges against both men. Brown who pleaded guilty for assaulting Rhianna in 2009 and Tyga who settled a sexual assault lawsuit against him during a 2001 video shoot.

The group hasn’t responded to either artist, but frontman Lauren Mayberry has posted some of the backlash she has personally received on her personal account. At least she has a good sense of humour about being called “bi**h” multiple times joking that the last one “really helped get the point across.”

Another person trying to defend Brown and Tyga’s actions with nothing short of abuse and threats.

Mayberry then used the group’s Saturday night concert to address the drama and explain why it would be  “morally dubious” for them not to speak out against someone with a history of violence.

They have to be “honest” and it would be “morally incorrect” for them not to comment. They aren’t “picking on Chris Brown for the sake of Chris Brown” but just think “domestic violence is wrong.”

“Maybe don’t promote serial convicted violence to kids,” she said but Brown’s fans have threatened to shoot her. “You may have proved the point,” Mayberry added.