After it was revealed that Meek Mill was not allowed to attend the 76ers vs Raptors playoff game in Toronto, Drake is coming to the defence of Mill.

76er’s co-owner Michael Rubin posted a picture on Instagram slamming Judge Genece Brinkley who he says has a “vendetta” against Mill when she didn’t approve his probation request to attend the game.

“We filed w/your court as soon as the schedule came out since you need to approve travel to Canada! Since you didn’t respond to numerous phone calls and emails we even sent a lawyer to the courthouse today!!,” the post said.

The post further explains that Mill’s parole officer approved the travel request, but Brinkley blocked it. The probation is from the rapper’s 2008 conviction of drug and weapons charges.

Judge Genece Brinkley – I know you have a vendetta against Meek Mill and are obsessed with trying to control every aspect of his life, but did you really NOT approve him to go to rep the sixers in Toronto for the game? As soon as the schedule came out, Meek asked probation for approval- they immediately approved! (FOR EVERYONE WHO DOESN’T UNDERSTAND, MEEK MUST STILL GET THE JUDGES APPROVAL PERSONALLY EVERYTIME HE LEAVES PA SINCE HE’S STILL ON PROBATION 12 YEARS LATER FOR A CRIME HE DIDN’T COMMIT) We filed w/your court as soon as the schedule came out since you need to approve travel to Canada! Since you didn’t respond to numerous phone calls and emails we even sent a lawyer to the courthouse today!! AND MOST IMPORTANTLY IF THIS HAPPENS TO MEEK, WHAT DO YOU THINK HAPPENS TO THE AVG PERSON(WHO CANT AFFORD GREAT LAWYERS ETC)ON PROBATION??

“They gotta let Meek into the city,” Drake, the Raptors’ global ambassador, wrote in his Instagram stories shortly after Rubin’s post. “It’s only right … we got a classic series on our hands.” 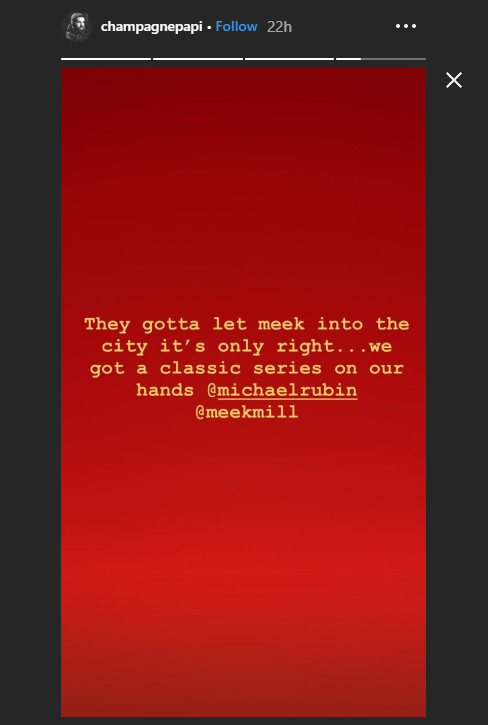 Mill has been a staple at Sixers games since being released from prison last year.

RELATED: Lizzo Recalls The Time She Drunkenly Slid Into Drake’s DMs: ‘It Was Bold’

According to court records obtained by Philly.com, Judge Brinkley did approve trips for Mill to visit the Netherlands, Belgium, Germany and the United Arab Emirates.