The 20-year-old beauty expert announced on his Instagram Story on Friday that he has decided to put a hold on his almost sold-out 24-city tour.

“A lot has gone on in the past few weeks which has led many people, including myself, wondering what was going to happen to the tour,” Charles began. “And after the last week of meetings and phone calls, and trying to figure it all out… we have officially come to the very, very tough decision that I am cancelling the Sisters Tour.”

“I know this sucks and people are going to be upset about it, trust me I am not really happy about this either,” the YouTuber continued, adding that he would go on and explain why the decision was made. 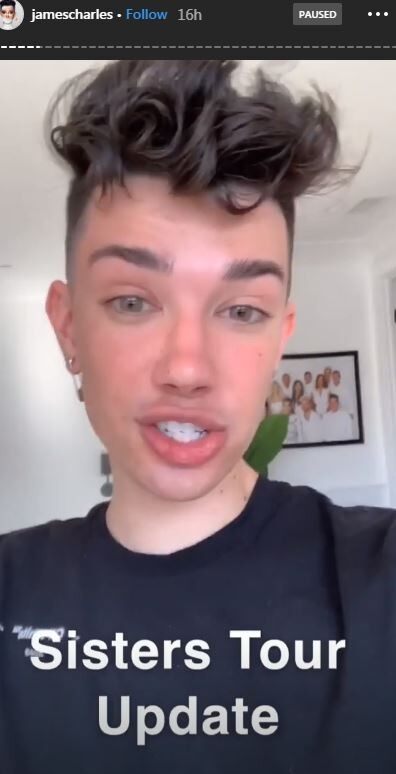 “I made the decision to pull the tour. This was 100 percent my decision. None of the venues pulled out, none of the brands that were going to be sponsoring it pulled out,” he clarified. “The Sisters Tour is not being cancelled because I was ‘cancelled.’ Let’s make that clear. I made the decision for a lot of different personal reasons.”

Charles then continued to explain that he is still on a break and wants to get his head straight after all the drama that happened between him, his former mentor Tati Westbrook and Jeffree Star.

“I’m not better and I’m not back either, but I am trying to move on with my life and focus on good things that make me happy,” the makeup expert continued. “Right now, I just don’t feel like I can deliver what I promised, and that sucks. It really, really sucks to admit.”

He concluded by promising fans that the Sisters Tour will happen one day, and he’s just trying to take care of his mental health and deliver the best content and products for his fans.

Over the last couple of weeks, Charles, Westbrook and Star were involved in a viral feud. However, the three pledged to put the drama behind them and move on. The spat began when Westbrook posted a lengthy video announcing the end to her friendship with Charles and claiming he stole her ideas, among other accusations. Charles responded with an apology video of his own, but Star decided to get involved, announcing that he was on Westbrook’s side.

After a follow-up video from Charles, Star posted a video saying, in part, “I inserted myself into something publicly where I shouldn’t have. I’m done doing that… This has to stop. I’m embarrassed by my own actions.”

Westbrook agreed with Star, taking to Twitter — despite her social media break — to write, “Although I do not regret raising my concerns I completely regret the way I went about saying them.” She likewise said that she would “not be making any further public comments and I hope and pray that no one else will make anymore hurtful statements on my behalf.”

In response, Charles thanked the pair for their sentiments and vowed to “not speak about this further.” While Charles has been trying to take a social media break, he was spotted at Kylie Jenner’s launch party for her skincare line, Kylie Skin.

James Charles Defends His Return to Social Media: ‘I’m Trying to Move on With My Life’